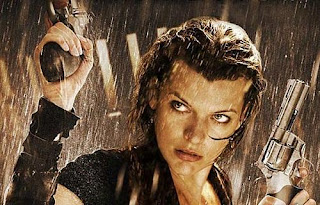 Hell to the yeah!! I am bouncing around this Arctic blast Friday because the trailer for the new Resident Evil film has been released. Whoo freakin' Hoo!!! Resident Evil: Retribution is the latest installment in the highly successful horror franchise starring my girl Alice, played by the ultra cool Milla Jovovich. Check it out...


All I can say is WOW! What a Mach 3, hair on fire ride this is going to be. Plus, it makes me happier than Newt Gingrich at a swingers party to see Michelle Rodriguez and Sienna Guillory once again joining Alice in the zombie killing. What a trio of badass bitches! These movies just do it for me. I mean the only thing that could make them better would be to have werewolves. And with the sheer evil genius that is the Umbrella Corporation, who knows, I may just get them.

These movies are not for everyone and many have accused them of being formulaic, but so what if they are. They're not pretending to be anything else. It's a killer female versus an evil organization and zombies. A simple, in-your-face formula that works in my opinion. And 200 million plus worldwide at the box office is pretty hard evidence to that effect.

I have been a huge fan of this franchise since the first Res Evil hit the theaters back in 2002. Alice is right up there with Ripley and Buffy for me. As someone who grew up watching my sisters be eternally stupid and victimized in horror films, these ladies were the Big Reveal. And indeed there are many more ass-kicking females on television and in films as a result of the success of these three characters. I love these ladies and can only hope that there will continue to be more roles like them for women. No more cannon fodder girly girls who require a man to rescue them.

So are you a fan geek like me? A hater? Or meh about the whole thing?
Posted by Unknown at 3:56 pm

great trailer... sony sure knows how to use the elements of what is going on in the world...

i am jeremy, this is my world.

Hey, I enjoy them! They aren't deep and I know what to expect - just a fun ride.

@jeremy LOL Sony sure does know how to deliver the goods. Love your sign off. ;)

@Alex These movies really are just one helluva fun ride. I have enjoyed myself immensely with each one. We know what's good. :)

The only negative (if you can call it that) I see is that the trailer was too short. Other than that, I'm jazzed about the new movie.

@Eric Yes! that trailer was too short. And September is too far away. :)

Milla Jovovich is indeed a fierce, sultry badass. The trailer does highlight the fun factor to the nth degree, so this could be an exciting popcorn, as you say, "Mach 3, hair on fire ride."

@Matt Thanks! And I'm glad I made you laugh with my Newt joke. He's a character that's for sure.

I love my popcorn and I know I'm going to have fun with this. I can't wait for September.

AFTERLIFE was tons of fun. I hope this one will be as good.

@Nebular Wasn't it? I loved Afterlife! September is too far away I tell you. :)

I've always enjoyed these movies. And I admire Milla because she's natural - as in, no boob job. That's refreshing to see in an actress.

@LDiane I know, right?! So many actresses get enhancements that it is refreshing to see someone without them. Young girls are so influenced by the beautiful women they see. And I am really looking forward to this one. I have always just loved Alice and think she is a great character for girls.

You know, I resisted seeing any of these movies for the longest time - then I read a 6 book series by S.D. Perry that was pretty entertaining. Then I played the first game some. Finally, I watched the first two movies. I did enjoy them, but haven't tracked down the rest. But if my pal Mel says the series is worth watching beginning to end - I have a new quest before me!

@Craig Yes, these movies are a hellagood time. I love watching the creative monsters they come up with and the latest entanglements Alice gets into. She always has the best weapons. ;)

Another tool for search engine marketing is via bulk
content marketing. Be honest and focus more on providing quality information than selling.

You will get a better ranking on the site.

I want to to thank you for this good read!
! I definitely enjoyed every little bit of it. I've got you book marked to look at new stuff you post…