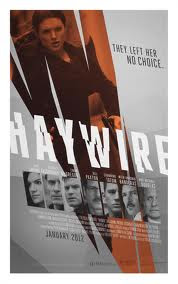 Gina Carano, real life MMA star, plays Mallory Kane, a gritty, balls-to-the-wall former Marine who now works for a private black ops firm. Before I get into the movie, let me just give props because Gina actually looks the part. This is no uber-thin sex kitten who would be KO'd in one punch. Nor is she wearing a barely there outfit and high heeled fuck-me boots, while she flips two hundred pound guys. She is a muscular babe with proper hiking boots, comfortable clothes and an alertness of body that only comes from being an athlete. There are no magical harnesses and gymnastics for this girl, either. She is hardcore, disciplined fighter all the way and that is what makes her believable as Mallory.

The film opens essentially in the middle, an upstate New York diner in the dead of winter. Mal cases the joint. She (and we) know they're coming for her, but she's not going to roll belly up like some beta bitch. No way. She enters, chooses her space, then calmly orders tea. The tension ramps up instantly.

Channing Tatum arrives as fellow operative, Aaron. He exudes a deceptive, laconic charm, but he's all steel. He's been sent to retrieve Mallory and he has no qualms about going through her to do it. My girl takes him out with a bit of surprise help from a local boy, Scott. It was so refrshing to see a young guy in the typical female aid role. Michael Angarano is equal parts good kid, scared vic and smart ass as Scott.

Through flashbacks we find out that Mallory had been on an extraction op in Barcelona. Upon her return, her boss and ex, Kenneth, played with double-crossing deliciousness by Ewan McGregor, handed her a simple two-day job in Dublin. She was to hook up wth Paul, an MI 6 operative, for a meet and greet with his criminal contact, Studor. Michael Fassbender stars as the icy, enigmatic British agent with a lethal core.

Something is not right from the start. Mal knows that Pauly is playing her, but she doesn't know why until she uncovers the body of her Barcelona assignment with a nice little piece of evidence framing her. It is soon on like the fireworks at Navy Pier. The hotel fight scene between Gina and Fassbender is quick, brutal and terrifyingly intense. There are no orchestrated roundhouse kicks and karate chops. Hell to the no. This is a smashed glass, flat screen TV demolishing, knock-down, tooth and claw fight. Which ends with Gina crushing Fassbender's throat between her thighs. Normally I object to this move. However, this was a far cry from the sexy Scarlett Johansson Thigh Master takedown from Iron Man 2. Michael's face is purple, his tongue sticks out and he thrashes around like a harpooned swordfish on a boatdeck. 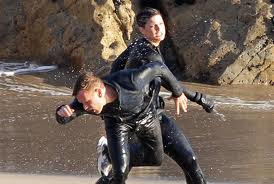 As the shit hits, Mallory is chased through the streets of Dublin in a cool, vintage spy flick style pursuit, alternating with catchy music and silence. Note, Mallory never moved without thinking first throughout this chase. There were no dramatic thirty-foot drops into crouches, nor are there tucks and rolls ala Jackie Chan or Daniel Craig. She looked and thought before she jumped to the next lower roof, then climbed down the fire escape. Mallory was wise to exits and potential weapons. She studied, she tracked. There were no stupid or unnecessary moves.

The rest of the cast is just as outstanding. In another series of interspersed scenes, we meet the orchestrators of the Barcelona job, Coblentz, played with Gordon Gecko-esque precision by the awesome Michael Douglas, and Rodrigo, a suave Spanish official portrayed by Antonio Banderas with a ruthless, king cobra smile. These two are just wicked. Bill Paxton stars as Mal's pops, John. He's smart, concerned and all the things you want in a tough dad.

The plot while a bit thin, has some meat to it. The non-linear time lends it a bit more complexity, but not much. There's the standard double agent playing both ends to smoke out a traitor. You had your stock characters, too, like the cops. Who were typical chauvinist pigs, dismissing every syllable Mallory utters with egregious disdain. Of course they meet a violent end.

One of my favorite things about this movie? There are no, I repeat no, scantily clad, nude or semi nude scenes from Gina. Well, maybe if you count the robe after the shower, but then it was not really anything. No shower scene, though. Only one bikini shot at the end of some silly vampette. However, Steven did give those of us who love men, a nice shot of Michael Fassbender. He comes out in nothing but a towel. Hell yeah, fist bumps Steven! Some payback for all those trite, candy cane female nude scenes from other action flicks. I hate it when women take off their clothes in a movie for no plausible reason. Like oops, the bad guys come just as they step out of the shower and they have to go on the lam in nothing but a towel.

Soderbergh took the action movie and flipped it in my opinion. He made this whole film feel realistic, as if it could happen right in front of you at any given moment. From the intimate camera work to the fact that Mallory did not have to fight off a coterie of behemoths that would never, ever blend into the background, it all feels authentic. Even the gun battles were not too outlandish. And the cops really came, something that never happens in a Bruce Willis movie unless he is a cop.

Another impressive point for Steven's direction is the end when Mallory gets her man. There's no useless "gotcha asshole" talk, she just flies right at him and starts the beatdown. He also rifs on that typical macho arm wound scene when Mallory escapes the diner in Scott's car. She drives with a bullet wound to her arm while she instructs the kid on how to patch her up. Boo-yah!

I have to point out that people have complained about the acting from Gina, that she's wooden and doesn't have a lot of range. Excuse me, do we expect that shit from Bruce or Arnold? Hell freakin no! So why hold her up to that? She was perfect as far as I was concerned. This is about a ballsy badass getting revenge for being set up. No call for exquisite subtlety. I certainly hope Mallory will be coming back in a sequel. She is a stellar heroine for little girls and women everywhere, including my friend's daughter, little G, who wants this movie for her birthday. And you know Auntie Mel will deliver.

Haywire is an edgy, in-your-face action film all the way. I will end with a fave quote from McGregor's Kenneth "You shouldn't think of her as being a woman. That would be a mistake."
Posted by Unknown at 7:13 pm

Nice review. This spy flick actually features some great fight scenes and stunt. It is edited right down to the bone and the production is about as slick as anything in recent years. Emotionally, however, it is on the cold side, mainly because of Carano’s stiff-delivery.

Great review! I especially love you calling those who have ranked on Ms. Carano's performance - you pegged it - Chuck Norris and Steven Seagal are not actors with huge range who happen to kick people. They are guys who know how to kick people and can say words strung together. I will always forgive such a performance in an action movie. I'm quite looking forward to this - but I have a feeling circumstances will have me seeing it in my home in a few months. Ah well. Cheers, MB!

@Dan O Thanks! I'm glad you liked the review. It is a very slick editing job and I think that's a big part of why it's so good. Could gina have been better, sure, but for only having one starring role, I think she did a gret job. I hope they give her another shot soon.

@Craig Thank you!! I didn't know why people were ragging on Gina. It's straight up action so I thought she was killer. Performances can always be better for the most part. I know she'll improve, the basics are there, so I'm looking forward to seeing her take on another role like this. Maybe bring Mallory back for another round. Enjoy this as soon as possible.

Hooray for Booyah!! I desperately must see this. Now. Right now.

All of the glowing reviews and, in particular your upbeat analysis, has raised my anticipation factor to stratospheric heights. Because I've not seen it, I parsed your review, ensuring none of the crucial plot details are revealed to me preemptively. But I did appreciate your general take on the tonal, technical aspects, which allows me to say without restraint, great review!

@Matt Yes, you must see this movie right now!! LOL Seriously, this is a terrific action film with a very real vibe to it. Mallory moves in a world of predators and they all circle each other with toothsome smiles and weapons barely concealed. And all look like people you'd pass every day and not think twice about. No hulking bald guys with automatics and armored humvees. Glad you liked the review.

Why has it taken me two days to see this?? Lovely review. Haywire is the shit. End of story. I'm SO glad we counted down for this. It delivered and then some, for every reason you mentioned. I also love that you touched on the fact that there was a lot of gender role reversal in this movie--not only from the obvious Gina Carano, but also from the fact that Scott played the helpless "damsel in distress" bit and Michael Fassbender (of course) played the eye candy. Great review, and I'm so glad G's getting a little Haywire in her life!

@M Me too!! This countdown was more than worth it. I'm ready to strap in for Round 2. And I must say that Michael made for some fantastic visual treats. It was so awesome to see the man sans clothes for no apparent reason. You know G cracked me up. As soon as the movie was over, she wanted to see it again.

What a fantastic review, Mel. I'm so glad you enjoyed this one that much. Yes, it has its weaknesses and it's far from mind-blowing, but for what it was it was pretty good.

@Nebular Thank, hon! Glad you you enjoyed my review. Haywire was a straight out action flick that really was a cut above the pack because it was so different from the usual manly man fair. I hope they make a sequel.

Even on the Eco mode which offers the least brightness, this projector still provides bright image which is really impressive. Spryte: We can edit that right? Okies. IN-EAR HEADPHONE EARBUD EARPHONE FOR iPAD Audio Mic. There should also be a variety of different tools that are available within the French language teaching software.