In Fuller rail yard, an idle holster Dewey (Ethan Suplee) is told to move a half-a-mile long freight train to make way for a school excursion train. Rather than doing his job properly he thinks he can save time and effort by forgoing to connect the air hose between the locomotive and the rest of the train, leaving it with no air breaks, thinking he can just steadily guide it off the track and connect the air hose later.

Dewey turns the throttle to its highest to enable the trains dynamic brakes. As it approaches a switch, Dewey sees it’s not set to the right track, and although his yardmaster warns him not to leave the cab, he does so to get in front of the train and switch it himself, but the train gathers momentum and beats him to the switch allowing the now unmanned locomotive, which has a cargo of toxic chemicals to gain further momentum along the rail lines of Pennsylvania, much to the horror of Dewey and the let yardmaster Connie Hooper (Rosario Dawson).

Realising its full potential threat, Connie and the rest of the national rail network are in a rush to think up solutions of how to bring the locomotive to a halt before their worst fears come a reality.

With failed rescue attempts and no one able to board the speeding runaway train, rail engineer, Frank Barnes (Denzel Washington) who at the time is training a conductor Will Colson (Chris Pine) come up with a plan to stop the train and begin pursuit of it in their own locomotive.

They are on a race against time before the locomotive reaches the small town of Stanton whose rail tracks will surely derail it causing the train to certainly explode with a cargo of toxic chemicals that will decimate the town.

Tony Scott successfully delivers a great action suspense thriller movie here which will surely keep you on the edge of your seat.

While reminiscence of the days of Speed with Keanu and Sandy, this flick has no bombs, no murders, no main villains, just a single threat of death and destruction in its wake.

The movie does not come without it’s host of problems, the lame and laughable instance of how this mess first began with the holster Dewey being one of my main gripes, but all is forgivable with a movie that just wants to deliver a high adrenaline rush rather than a suspense drama you have to rack your brains to think about. 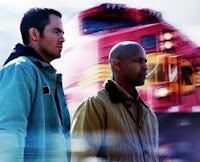 The characters of Frank and Will, played by Denzel Washington and Chris Pine, lack chemistry at times but certainly deliver decent performances and bring the movie to life, also a definite notable performance by Rosario Dawson complimenting the movie.

Back stories accompany the main movies premise, single dad Frank trying to do the best for his girls even though he will be let go of his current job soon to make way for younger more ‘capable’ engineers, and with Will Colson being one of the new younger unpopular recruits being trained by Frank in his conductor role. The character of Will is also having relationship troubles wife his Wife Darcy (Jessy Schram) after accusing his wife of cheating by text and going after a friend of hers who he assumes is the guy she is cheating on her with and pulls a gun on him, the guy being a police officer. This is explained by the character Will to Frank rather than seeing it played out on screen. A restraining order is in place, restricting him to see his wife and daughter. Both characters personal stories playing a decent part when their lives are in danger and being witnessed on TV news reports by Franks daughters and Wills wife.

Unstoppable never lacks pace, at 90 minutes there is drama and threat around every corner to keep your butts firmly stuck to your seats. 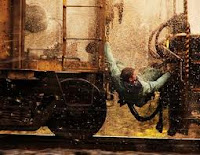 The movie is rated a 12A, and in my opinion well worth a cinema outing, and if you can’t make the big screen it’s a must watch when it’s released on DVD.

I enjoyed this movie for what it was and think it’s one of Tony Scott’s best for a long while and one of the best runaway train movies out there, go see it!
Posted by Dempsey Sanders at 1:30 am

I saw it two weeks ago and while it's not a film that will stick with you for long, those 90 minutes hold you hostage!

I said it before and I'll say it again - I always miss everything that's written in a post when somebody let's Chris Pine stare at me with those magnetic eyes from the UNSTOPPABLE poster :)

lol all them big words in that sentence and you still spell my name wrong.

I don't spell it wrong, Dempsy, I write it like that as a sort of nickname, although I know it's pronounced the same way ^_^

hmmmm Demps is the sort of nickname, but ok, I will let you get away with it...for now...you big hunk of love

I'm watching it tonight and I literally can't wait! And your wonderful review makes me wanna feel even more excited about it. :) Great job, Demps!

Likely will catch this one at DVD store later.

heard good things and now you've added to the goodness. if and when in mood for mindless fun, will see this one. though may not go sober. oops, did i say that aloud.

Yeah I've been wanting to catch 127 Hours too, still waiting for it to be released in my region.

Finally saw this over the weekend and it was a total blast. I don't think I blinked the entire time. LOL

Earth calling Sanders shuttle! Are you alive? Have the Martians taken over the ship? No reports for almost a whole week. We shall ask admiral Chris to send a search party after you!

Ha ha, Hi Dezmond, I have had to go away for a wekk with work, and now with Christian gones its just me, but I'm back tommorrow . Thank you for asking x

I liked this movie so did everyone that i know who went and saw it.

А! Thanks for this wonderful post.Admiring the time and effort you put into your blog and detailed information you offer.

This is my first time i visit here. I found so many interesting stuff in your blog especially its discussion. From the tons of comments on your articles, I guess I am not the only one having all the enjoyment here! keep up the good work.

Thanks for summing it up so well. I think I’ll be returning here often. Best Regards.

This article was extremely interesting, especially since I was searching for thoughts on this subject last Thursday.

I am incapable of reading articles online very often, but I’m happy I did today. It is very well written, and your points are well-expressed. I request you warmly, please, don’t ever stop writing.

Great blog with helpful information. Pics are cool and nice. Looking for the best Business Advisory Firms In IndiaReach CAC PVT LTD to get started.


Dishavar Single Jodi will pass with 10000 % guarantee because we have date fix leak pair by which you can get rid of all your debt by playing only honest customer call or message people who play fat game will get daily profit by guarantee this chance Don't miss out, get the game booked soon satta king