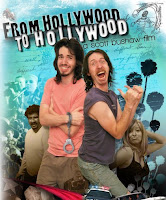 Skyler and Dempster Pierson are two brothers on a twisting journey of a lifetime from Hollywood Florida to Hollywood California, pursuing their dream of writing and starring in their own movie.

A silently weird opening may lead you to think what on earth you may have just stuck in your DVD player but it doesn’t take long for the two main characters Skyler Pierson (Scott Bushaw) and his unbelievably wacky brother Dempster (Jeff Bushaw) to light up your TV screen.

Filming was shot largely in the Los Angeles area in about 5 different cities, with some scenes also shot in the Orange County area. 100% of this production was shot in Southern California.

The film successfully pulls you in with the characters and the unpredictable storyline but only if you get the comedy. What the Bushaw Brothers endeavour to do in this feature is to deliver something new in a wacky and insane way that you either get it or you don’t. It pushes boundaries in new and creative ways making it a unique story that could honestly end up anywhere which is what I loved and respected when viewing it for the first second and third time.

They make great use of a limited budget which took them over three years to make.
Sure, there are a few moments of inexperienced acting when it comes to the character of Fernando, their new roommate, and the violent handyman but both still deliver some very funny moments.

The character of older brother Dempster (not me I swear) is hugely entertaining, with moments of side splitting laughs, you certainly would thank your lucky stars not to have a brother like him, which leaves Skyler to take charge through the movie as the sensible but unlucky one, brilliantly performed by Scott Bushaw.

This movie won’t be for everyone, like I said before, you either get the comedy or you don’t.
What’s for certain is the Bushaw brothers deliver something different to the audience, and the amount of effort they put into it is extraordinary considering it’s budget. The feature never takes itself too seriously, even kind of making jokes at itself in some moments.

I certainly enjoyed it, I felt like I was on the journey with them, and wishing I was part of their cast as it must have been a blast making it. The movie is not shy of taking risks with jokes either.

The funniest moment for me without spoiling too much of the film is when Dempster’s getting down from a tree by order of the local police, for his bare ass to hit the unfortunate police mans face, which would make my top10 comedy moments amongst any comedy movies.

The DVD also comes with special features, an intriguing interview with Scott and Jeff Bushaw explaining their thoughts behind the movie and what they intended, which certainly made for interesting viewing, and accompanied with bloopers which are very funny along with some extended scenes.

The film is intended for mature audiences and although unrated it would no doubt be rated R. The trailer and cast information can be found over at the films official website: FromHollywoodToHollywood.com
You can also buy a copy of this movie at Amazon for $9.99 here (prices may vary and change from time of this review).

Final Word and Summary: Wackiest sense of humour that won’t suit everyone, but if you get it you will be on a journey that will give you belly ache with laughter. Upon watching this I have great admiration for Scott and Jeff Bushaw, and if this film was a learning experience we are all to expect great things from them in the future.

Have you seen this movie? What are your thoughts? Leave your comments below!
Posted by Dempsey Sanders at 2:00 pm

this didn't seem like one show that i would pick out from the list if you didn't introduce it. the different sense of humor as you had introduced it, it made me curious n wanting to watch it!

I'm glad it's peeked your interest Levian, if you do watch it, let me know what you think of it and thanks for your comment x

This doesn't quite sound like the kind of movie I'd watch, but I do agree with your point about how a person either "gets it" or doesn't. It can apply to pretty much any art form, or even to any idea that's out there.

Always great to hear of new directing talent, might just take a look at this :)

I'll have to check this out. I'm always up for the bizarre because I have what most of my friends consider a strange sense of humor. I love films like Fargo, My Five Ex-Girlfriends and Rosencrantz and Guildenstern are Dead.

I'll check it out on NetFlix.

never heard of this flick, but I'm not surprised with that fact actually :)
But it does sound like a weird little cinematic charmer :)

Have you watched MAMBO ITALIANO movie, Dempsy? It's also a charming little film.

Really never heard about this movie, is it a big screen or direct to DVD movie?

I clicked on their website, must say it does lucky wack and extremely funny, my kind of movie, will have to order it. Thanks for this review Dempsey, very fair and very detailed on a movie I would not of had a clue about if it was no for your post.

Software is widely used in the United States and India. One of the systems that helps people install and update the best movies ever made by terrariumtvultimate.com!