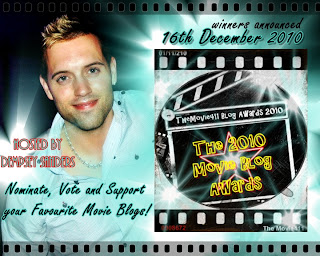 Well TheMovie411 Blog Awards are now in full swing and we have only a few weeks until the Grand Final where the winners will be announced.
Over the last month, you have been nominating your favourite Movie blogs in different categories, and now we have our Top5 Nominees for each award. You can view all the nominees and vote for them here: VOTE FORM.

There has been a huge interest in the blog awards, with so many people nominating and entering and I would like to thank everyone who has got involved.

I would also like to apologise to my loyal readers with the lack of reviews and gossip at The Movie411 over the last week. This is because at present it’s only a two man team, myself and Christian James, and all of our spare time has been spent registering nominations and e-mailing writers back with their questions on the Blog awards, we genuinely can’t believe how popular its has become.

However, I now have my time back as the voting poll will register the votes for me…..ahhh how nice, I can relax and enjoy the fun of it too now.

I would like to personally congratulate all Blog sites that made the Top5 in any award category, and would ask my fellow writers and readers to check out the blogs entered and show them your support by casting your votes. And a big thank you Christian James, who is now leaving the Movie411 to concentrate on his new job, he has been our award admin and contacted a lot of you by e-mail and registered hundreds and hundreds of nominations, so thank you CJ, (I might finally get my IPOD back!).

Finally I would like to thank my sodding self! OH YES. Last night I didn’t sleep, I was up all night with this chuffing award thing, you think anyone offered me a Nightol? Did they hell! And to make matters hugely worse, because I was so tired I fell asleep during X Factor, and missed my favourites, the One Direction boys performance. My partner tried to wake me and blew in my face and I apparently acted like a dog would and tried to bite air, as some dogs do if you blew in their face. You see what this is all doing to me? I am now acting like some crazed animal! 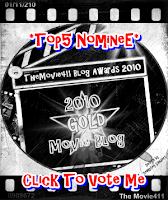 So it’s all up to you now guys and girls, winners will be announced on December 16th with voting closing two days before, also several awards not open to the vote will be announced including our Special Achievement award in the winners post. Blog sites that are in the top5 will display a badge similar to the one pictured to the left. Happy voting!!
Posted by Dempsey Sanders at 11:36 pm

Thanks A LOT to you and Christian for all your hard work and for making this so much fun! A big round of applause from Germany to you!

god bless you Fritz, thank you very much from me and CJ

Dempsey, you and Christian rock!! I'm amazed by all the info you have here and have made it my place to check when I want all the best movie news. Best of luck with the awards. I hope they continue to get more popular every year and that you gets tons and tons of new traffic here.

Whether or not we get the win, gratitude and credits go to you Dempsey and Christian. Thank you so much for the great efforts!

Wow... I can't believe my blog made it to the top 5! I feel honoured just for being considered! Thank you so much Dempsey (and Christian too) for your hard work on both the awards and your blog. BTW, you look pretty cute on that new picture ;)

Good luck to everyone!

Thank you, Dempsey and Christian for your hard work. I can't even imagine. Just keeping up a "regular" blog is hard enough work. Hope you catch up on your sleep. And again, thanks for the support. Fun to be in the top five, for sure.
Jon

I think Christian deserves a lifetime achievement award for counting all the nominations! Now who's with me on this? :)

Dashing pic on this banner, Demspy, by the way ;)

Thank you J-Son,Jonathan, and Melissa good luck in the top5 for those of you who are in it!

DEZMOND, I agree, but again I'm being harsh as us at the movie411 can't be involved for an award :( But I am giving Christian a big kiss, and taking him out for a night on the town! He is also looking forward to your perfermance with Lady Gaga! And me too.

Also thank you and Moonwalker about the picture comment it made me smile form ear to ear (I can do that I have a huge gob!)

Very detailed info. I am very happy to I found this entry..

Oh, Demspy, haven't you heard? Justin Timberlake tried hard to steal me over after he heard Gaga wanted to do a performance with me, so now I'm doing SEXY BACK/CRY ME A RIVER gig ;) With Justy :)

And when you take out Christian out please do all the things I would do too ;)

Ha ha, i love it, you and Justin will be very welcomed at the finals!

And I will try do all the things you would when me and Christian go out although I'm worried I would get arrested! ha ha

I'm sure it's a ton of work! Thanks again. Hope I'm driving some traffic as well as votes your direction.

Thank you Alex, and good luck with your nomination too

can't wait for the result to be announced! in the meanwhile, i will wait to be reading about the reviews you always manage to make sound so interesting!

Goodluck to the nominees..This is very exciting!

amazing amount of effort u put into this.
can't believe how many blogs r involved :)

vote for me for sexiest male :)