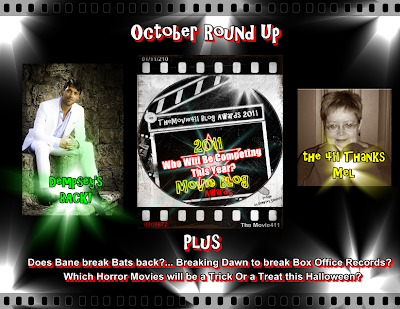 
it's been so long since I last posted it’s took me 3 days to figure out my password to log back on my own site! May I first apologise for being out of the loop for so long. Though for my own personal reasons I don’t want to go into too much detail, the beginning of the year was a little rough for me and the end result being that my batteries were completely worn out. I would like to thank many of my readers for the fantastic e-mails and get well wishes that you sent me, and I am glad to say I feel recharged and ready to blog again.

However I would like to say my biggest thank you to Melissa Bradley, co-editor of the Movie411, for holding down the fort and keeping the 411 alive and well. Many of you have enjoyed her posts, and though she has her own blog, Melissa’s Imaginarium, and writing her recent new release, Nathan's Angel it’s quite surprising she has managed so well to keep up with this one too. I am honoured to say that she is a dear friend of mine, and the 411 is just as much her creation as it is mine - Melissa I love you and thank you so much. 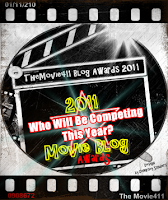 As well as my return, it is also that time of year where TheMovie411 welcomes back for its second run, the 411Movie Blog Awards 2011. Last year we had an overwhelming amount of movie blogs enter and compete in several categories and it will be exciting to see how many new and exciting ones will compete this year, as well as those blogs that have stuck around and got bigger and better, hoping to retain the title they won last year. (To see last years categories and the winners click here).

Details of this years blog awards, and how to enter will be posted on TheMovie411 on Monday 24th October. If you fancy joining in the fun, or nominating your favourite movie blog for an award be sure to check out the post to find out how.


So what’s new on the rumour mill?

Over the last two weeks, Christopher Nolan’s long awaited 3rd and ‘final’ instalment of his Batman franchise, Dark Knight Rises, has seen much speculation over weather or not villain Bane will do some serious damage to Batman much like in the comic story Knightfall where Bane breaks Batman’s back.

Over the last few weeks, many teasers, video leeks, and set pics have been released to further excite us, some in particular supporting the speculation by seeing Bruce Wayne limping through the streets of Gotham. Though hobbling along is not great proof of a Knightfall story line, maybe this time Batman has really met his match? Bane (played by Tom Hardy) certainly looks as if he will be more menacing than the last time we saw him on the big screen in the dreadful Batman and Robin movie, and with a villain as formidable as Bane, and with the recent pictures of the Batwing swooping through Gotham, 2012 can’t come soon enough for eager Dark Knight fans. 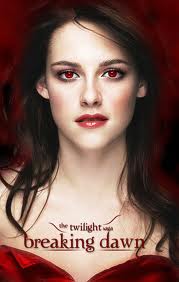 From breaking backs to breaking the Box Office, the fourth chapter in the Twilight Saga -Breaking Dawn Part 1 has been tipped to break worldwide records when it is released in November.

Fans of the Stephanie Myer novel turned movie have not only been campaigning for an early release date but trying to pre-book early cinema tickets in their thousands, almost two months earlier than its actual release date of November 18th. Though the movie will no doubt be an overwhelming success, especially for the time of year, can it really over take worldwide records of the phenomenal triumph that is Avatar? Hmmm Sceptical!

And finally, ‘tis the season the be frightful fal la lala la la la lahhhhhhh, so lock your doors, bolt your windows…or bugger it and sod off to the cinema. Which movies will you be watching on the big screen this Halloween?

If you’re a fan of the series so far, then my recommendation for a treat is Paranormal Activity 3, which is set as a prequel to the previous two outings.. PA3 has plenty of jump-out-of-your-seat-moments, even if it does fail in originality somewhat. It remains as creepy as ever, with some great performances by it’s cast throughout. Released 21st of October, you can check out the trailer below.

Posted by Dempsey Sanders at 2:07 pm

Omg Dezmond, ive missed you so much! Heading over to check out whats new on Hollywood Spy x

It's good to hear from you! Melissa has done an outstanding job running the site while you've been gone. Excited about the returning movie awards. Already know some blogs I'm going to nominate!

So happy to finally have you back! Your posts have definitely been missed! Welcome back! :)

Aww... Thank you very much, sweetie. It was my pleasure to man the bridge so to speak while you've been away, but I am ever so happy to have you back in the command chair where you belong. Here's to brighter days. :)

Hello! I'm a fairly newbie - came aboard while you were out, Mr. Sanders - nice to meet you! Any pal of Melissa is a pal o mine!

Demps, you can't even imagine how glad I am to see you back on track. I actually can't believe that's happening... It's been a while.

You look great as usual, and I'm glad to know you feel so much better now.

Can't wait for the Monday post and this year's Movie411 movie blog awards! I bet it will be as fun as last year. And, hey, I won best animation blog last year. WTF?! :)

"Details of this years blog awards, and how to enter will be posted on TheMovie411 on Monday 24th October." - Yeah, right. :)

erm I am on new york time right now, and though perhaps late in the day, it will be up!

Thanks for the welcome back guys, missed ya's x

I have not been blogging myself much lately, but have popped back from time to time.
Melissa has done an amazing job. But also so good to see you back again

I have not been blogging myself much lately, but have popped back from time to time. Melissa has done an amazing job. But also so good to see you back again