Check it out! Here is your first look at Henry Cavill as Superman in this newly released photo from the set of the new Warner Brothers film Man of Steel. 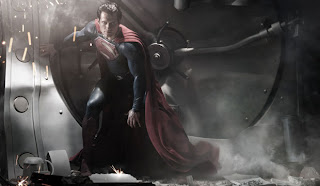 Wow, huh? The colors are darker, edgier while the suit itself looks textured, more like Batman's. The S insignia is kind of wicked, raised up from the line of the suit like a breast plate. The cape look quite voluminous. I seem to remember a certain superhero fashion designer, Edna from The Incredibles, who had a warning about capes. Anyway, here's a look back at Reeve's bright blue body suit for comparison. 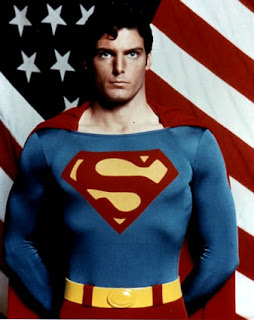 The Zack Snyder helmed reboot will hit theaters June 14, 2013 and has added Laurence Fishburne in the role of Perry White, the editor of the Daily Planet. He joins an already A-List cast that includes Amy Adams as Lois Lane, Diane Lane as Martha Kent, Kevin Costner as Jonathon Kent, Michael Shannon as General Zod and Julia Ormand as Lara Lor-Van with Russell Crowe still listed as rumored for the role of Jor-El as of this writing.

I saw that on Blastr earlier today - even thought about posting the picture tomorrow.
The darker look is good. Reminds me of the Batman reboot. And we know how well that turned out!

I'm excited about the new look. I have been hoping that Snyder would give Superman more of an edge like in Smallville and it looks like he's done that. Henry looks great.

I can't accept Diane Lane as Martha "Ma" Kent. I still see her in A Little Romance.

I'm okay with everything except Lawrence Fishburne as Perry White. Sorry but I'm not a fan of the whole "race neutral" stance being taken with movies these days. As far as I'm concerned, just tell the story the way it was written; every re-imagining fails to live up to what made the story great in the first place.

Melissa - I'm cautiously excited. It looks interesting - but at the same time there's a small bell going off in the back of my mind saying "Superman is not Batman." I hope the filmmakers remember this. I'm not saying they can't bring an edge to the movie - but Superman cannot be a tale told as darkly as the Gotham Guardian's. Not without changing the character beyond his concept. Still, not condemning before I see - that hasn't worked for me in the past *cough-Michael Keaton Batman-cough* *cough-Robert Downey Jr Iron Man-cough* so I'm keeping an open mind. The rest of the cast sounds intriguing - and I'm all for Laurence Fishburne as Perry White. He just needs to be directed to play it crabby and energetic - not to fall back to the Zen-cool quiet guy persona he brings to a lot of roles. Great report - thanks for posting!

Oh man. I really wanted them to get rid of that plastic looking suit that Brandon Routh wore. Surely there has to be a better designed "S".

Admittedly, the cape is awesome.

You got good points there, so I always check your blog, it looks like you are an expert in this field. keep up the good work, My friend recommends your blog.

looking hot, and I like the scales on his suit, the only thing I don;t like are missing eyebrows :)
Not sure why are they releasing a pic two years away from the premiere. Cavill surely won't look like this by then.

Henry Cavill seems very appropriate for this role and he looks amazing as Superman. And youy know I LOVE Snyder, so I expect a lot from this reboot.

@Tom LOL I remember A Little Romance. Time sure flies. Diane is only a few years older than me so I'm not all that thrilled either that she's old enough to be Superman's mom.

@Eric Thanks for the comment. I like seeing different takes on roles. Sure sometimes it doesn't work, but I think this just might. As long he doesn't do the zen cool.

@Craig Oh I love RDJ as Tony Stark. I think he's perfect. :) Michael Keaton as Bruce Wayne, not so much. I agree there.

I think it's time Superman got an edge. They did it successfully in Smallville so I'm all for a dramatic change. I think his boy-next-door persona is why the last Superman movie was a big fail. We're past that unless we're watching the Chris Reeve movies for nostalgia purposes.

Fishburne shouldbe good as Perry White, though there are a lot of people who seem to disagree. We'll see, though. :)

@ms mariah Yeah that S is a little distracting. The cape looks quite interesting, though.

@Dez Yeah, I'm loving those scales too. ;)I think Henry looks hot, though I'm sure he'll be even more buff was filming goes on.

@Nebular I love way Henry looks as the Man of Steel. I'm a huge fan of Snyder as well so it looks like both of us have high expectations for this film. :)

I'm a lifelong Superman fan and the previous movies will always have a special place in my heart.

That said, this image makes me a little disappointed because it looks like it's Superman with an edge. That's something that I didn't really want to see, there needs to be a distinction between Superman and Batman and this image kind of gives me the impression that it's going down an edgier path...consider me a little anxious til I get to see it.

@Russell_Oz Aw... I want Superman to have bit of an edge. They did it quite successfully in the Smallville series. I think part of the reason that the last incarnation failed was that it tried to recapture the purity and spirit of the Christopher Reeve films. You can't re-invent the wheel so I think that Snyder is absolutely right in going in the complete opposite direction. Not Batman dark, no as they are different, but not so boy-next-door either.

Okay for one good job on trying to make superman better for this generation of people but come on, Why not star Tom Welling as Superman, Like come on hes been playing superman for 10 years why not have someone of that skill