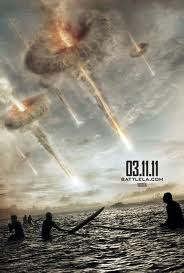 From watching the original V series to the big screen flicks such as the recent Skyline, the Alien Invasion genre has captivated me, the question of whether we are alone in the universe being answered for us in a way that intrigues or terrifies it’s viewers.

Of my generation, Independence Day is still one of the best alien invasion movies to date with little since surpassing it, ok maybe the remake of The War of The Worlds weren’t bad and Monsters certainly being different from many, but after watching Skyline which failed to raise the bar on previous outings from it’s genre I was kind of giving up and hoping they would just make an ID-2.

My hopes and excitement were raised once again upon the viewing for the trailer Battle Los Angeles, and luckily for me being invited to a critics preview of the feature film. 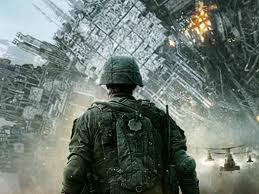 Los Angeles becomes the last stand for mankind after witnessing large cities from all over the world fall at the whim of an alien invasion. An unknown that are seemingly un-defeat able, humans lose all hope of survival. A group of Marines led by Sgt Michael Nantz (Aaron Eckhart) fight to maintain L.A from the aliens intent on destroying it- sound similar to a movie you have seen before? Well it will be, after all, how many different angles can an alien invasion movie have?

While many might have already seen the trailer (below), what grabs you, and what normally first attracts an audience to a film like this is the special effects, which this film has in abundance of, all being worthy of a cinema ticket price tag. Unfortunately however, where the special effects thrive, the script lacks.

The usual clichés are thrown in that you will have heard from various other similar movies of its type, and one could compare it too War of the Worlds meets Black Hawk Down as the military battles are just as gruesome and engaging. Also I couldn’t help but feel it had a computer game feeling to the movie, Call of Duty perhaps. While all that might not actually sound too bad, it sometimes drifts the movie off target, with some key segments of the movie leaving you with the WTF conclusion. 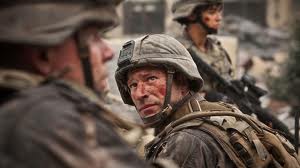 The acting may also not be award winning performances, especially with the likes of Aaron Eckhart and Michelle Rodriguez who are normally of sound quality but that again is due to the script letting them down in parts, overall not bad and certainly way better than some of their supporting cast.


Liebesman’s directional and camera work also lets the movie down quite a lot, though maybe a style we don‘t see all to often with this genre, so many close up shaky shots, even if it is to give the illusion your in battle with them becomes annoying, though his biggest applause would come from seeing the different scenes flow together quite nicely. 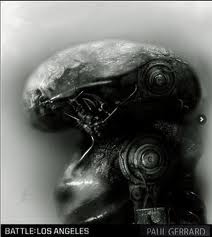 The aliens themselves - well not so disappointing as aliens go I guess, their main reason for attacking the earth is for our water. However rather than focusing on the aliens and their reasons or back story they rather focus on the US army, and how to be a great soldier, and while that’s fine by me having a great respect for armed forces, it takes focus off the invasion to much throughout the movie making it look like a very long Army recruitment commercial rather than what it is meant to be.

The feature film has some great showdowns between human and alien worthy of being in the same category of movies like Independence Day, but also differentiates from the norm in the way that the aliens weaponry matches ours on a similar level, no super alien bombs that can wipe out cities in a single blast. which at times forgives the script’s week plot parts, elevating it to a cool popcorn flick which you wouldn’t normally see until a summer tent pole.

Overall: Battle Los Angeles is a fun popcorn flick with brilliant special effects, so your wallet will not mourn your cinema price ticket. However if your expecting a groundbreaking alien invasion flick that doesn’t use every cliché you have seen in similar movies then unfortunately you will be sadly let down.


Interested in seeing this movie? Have you already seen it and what are your views? Leave your comments below.
Posted by Dempsey Sanders at 8:44 pm

Thanks for the review, looking forward to it!

Excellent and thorough review. Independence Day is the ultimate alien invasion film for me as well and there hasn't been much effort to dethrone it.

I will be doling out the cash, though. I am an F/X junkie and the trailers have me hooked. And there's Aaron Eckhart. I love him. Seeing him in uniform being all alpha male will be all the rest of the entertainment I need. :) Sexy man shooting aliens and blowing things up? Man, I am easy. LOL

I love the way you write out reviews Demps, and always a fair opinion. Alien Invasion flicks ain't my bag, but did like Independence Day, after that with a few that I watched, it was just dissapointing, Monsters bored the hell out of me and Skyline was just bad, this looks like it could be good, but could let you down too.
Brilliant review

well, I'm not sure about you, but I do love me some films in which USA is under an alien attack :) Makes me wanna applaud whenever I watch White House destroyed in INDEPENDENCE DAY or in this case LA destroyed by aliens :)

They been plugging this movie like crazy. It special effects look like they’ll be good, but I wasn’t anticipating a big unique plot. I’m glad to hear it still fun to watch though.

Great review,
I thought this one looked pretty average but it's been getting worse reviews than I would have thought...
I don't think I'll see it, Alien Invasion films aren't really my preferred films, although I do love District 9.

i agree when you said that Independence Day was the best alien-themed movie. i loved the movie so much back then! War of World was cool, it didn't give me much feeling that it was alien, more like some high-tech stuff. skyline was truly, truly a disappointment. i haven't get to watch this one, but definitely am planning to. :)

Thanks. I feel better about dishing out ten bucks this weekend to see it. Cant wait to see LA blow up.

I was really hoping this one would be good. But according to your review, it sounds at least more fun than the unnecessary 'Skyline'.

Great review, Demps! I'm looking forward to see it, and thankfully, it will be released next week in my country. I have nothing against mindless 'Alien Invasion' flicks, if they provide enough entertainment and spectacular visuals, of course, so I expect to enjoy this one a lot. The previews looked awesome, plus, according to your review, it's pretty decent.

I actually thought it was great. Much better than Skyline. Might even come close to ID. But to me its more of a war film than an alien movie. The shaky camera style was purposely done as in other war/military flicks for that kind of effect...and why do people like to see "America being attacked movies"?

I have been warned and am prepared to leave my brain at the door.

The Alien invasion premise has always captivated me, at least if it is done correctly. These kinds of movies typically have fairly strong box office runs, so I'll definitely get a chance over the next few weeks to catch it on the big screen.

I purposefully avoided reading your entire breakdown because I don't want to know too much, but from what I read, nicely done.

Totally agree with you on this one Dempsaroo. Luckily I got pre warned too before seeing it this evening and basically if you see it as a fun popcorn flick then thats what you will get, nowt groundbreaking in the world of Alien Invasion movie. Bring on ID4!

Binary Options is the way to [url=http://www.brokersring.com/]make money[/url] securely online