I really liked the original Lake Placid back in the day, to then be let down by one of the most boring sequels ever with Lake Placid 2. When watching the trailer for its third outing I thought some faith might be restored in our B-movie monster croc flick, instead what I observed was a croc of sh*t.
Lake Placid 3 (2010)
The Synopsis:
A game warden moves his family to Lake Placid, once the site of deadly crocodile attacks. Locals assure him the crocs are gone, but his mischievous young son finds a few baby crocs and begins feeding them. They quickly grow into very big adults and start attacking the game warden's family and nearby town. 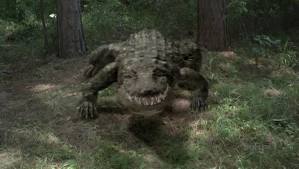 Lake Placid 3 is an obvious made for television outing. Dodgy CGI, mediocre acting and a plotline that barely has much to shout about, makes this sequel one of the worst horror/creature feature I have watched for a long time, with the exception of maybe Anacondas 3 offspring.

Although less boring than the first sequel, nothing new is brought to the table here. A bit of nudity, a few brainless girls and wannabe macho lads running and splashing around until the crocodiles are sick of their whining and chomps them up for dinner, which probably being the best part of the movie for me as I just wanted them to shut up. There is one or two funny moments, but it’s a quick giggle then forgettable, and for the easily scared a few little jumpy moments now and then.

Its saving grace is that it is ok paced, and doesn’t over shoot what its trying to be, Director G. Furst understanding Lake Placid 3’s place in the movie/television world, and also Michael Ironside showing off his acting experience amongst a lot of newcomers.

The movie left me feeling so tired and fed up I had not even the energy to find a 'pick-me-up' movie. Maybe a decent time filler for hangover Sundays, or even fans of the cheap B-movie experience that really don’t mind a bit of cheese, other than that no treats in this one to look forward too …avoid like the plague!

Have you seen this movie? What are your thoughts? Leave your comments below.
Posted by Dempsey Sanders at 11:57 pm

I saw this on the Sy Fy Channel and was as bored as you were. I love Michael Ironside, though, he's always a treat. He needs a better agent like my other fave underrated actor, Tony Todd.

Demps, this film was HORRENDOUS! It has no reason to exist!

wow, that's one of the spookiest posters I've ever seen!

Talking about giant croc, have you seen Aussie film called "Rogue" Dempsey? It was a much more better film.

I've just taken a look at your blog and I think it's awesome. I will be visiting here more often for the great content!

You've made my day and you have a great day too!

Yeah not much to really watch this one for unless your like me and have to watch every Michael Ironside film ever made or want to see the girl who plays Neil's sister on "the inbetweeners" topless then I guess it might still hold something.

Still trying to track myself down a copy of "Dark Age" which is another little known Ozploitation Giant croc movie.

Anonymous said...
This comment has been removed by a blog administrator.
9 November 2010 at 01:01