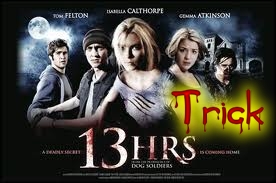 The producers of Dog Soldiers brings us a new British horror this year, 13 Hrs.
Director Jonathan Glendening directs a hot young cast on a relatively low budget to bring you a werewolf flick with a little difference.

Theirs a bad moon on the rise which spells a night of horror for a group of youngsters. Sarah Tyler returns to her troubled family home in the isolated countryside, for a much put-off visit. As a storm rages outside, Sarah, her family and friends shore up for the night, cut off from the outside world. But something comes out of the driving rain and darkness. Something that holds a dark secret so devastating that, in one night, it could wipe out the entire family. Can they last 13 hours until the next sunrise?

Although enjoyable in parts, poor script and rushed characterization makes this horror flick more of a Trick than a treat this Halloween.
What is no doubt mainly due to a speedy development, 18 days only to shoot (thanking an Annonymous called Ed for that bit of info), the young cast have a quick-fire script to establish their family ties which comes off a little lame and makes several characters rather annoying.

The lack of a budget makes the most of some pretty decent shooting, seeing from creature and victims point of view shots which isn’t anything new to the movie goer, but doesn’t fail to keep some parts very interesting.

It being a werewolf flick, the difference with this movie is that it never really establishes the creature being a werewolf at all, we assume however because of the full moon once risen is when the creature appears, to the title playing a part that they have 13 hours until sunrise. The creature itself is only mainly seen in brief moments of film which successfully brings tension to the movie, audience being scared of what they can’t see and so forth, to a bit more saving grace towards the end. 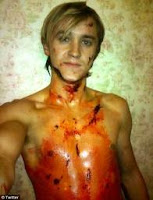 Acting makes the most of a pretty poorly rushed script in this one, Tom Felton among the best to shout about, his character and acting skills certainly bring more zaz to the movie.

There is also some fairly jumpy moments in the film, the creature constantly stalking and devouring its victims after chasing them down in corridors of a somewhat spooky house.

A sequel follow up may do better here which it alludes too, if given more time and budget.

Overall, although not a total failure, and a worthwhile watch for werewolf lovers, 13hrs didn’t quite do it for me, once ejected from the DVD player I don’t think a re-visit will be anytime soon. 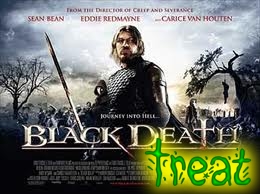 Set during the time of the first outbreak of bubonic plague in England, a young monk Osmund (Redmayne) is tasked with learning the truth about people being brought back from the dead in a small village. Then the Bishop's envoy Ulric (Bean) arrives with news that an isolated village is somehow pestilence free. Drafting Osmund as a guide, the team heads off to confront what is no doubt pure evil, and indeed when they arrive they meet the village leader Langiva (van Houten), who has turned her back on the Church and created a creepy idyll.

Christopher Smith, director of Triangle and Severance, brings us a gripping medieval horror with Black Death, backed up by a superb performance from Sean Bean.

Tension is in abundance throughout this movie, showing off clear editing and directional skills by Smith. The script is nicely paced with a rare dull moment, even though sometimes it does seem reminiscing of The Wicker Man which can be a tiny bit annoying.
A strong performance from the ever fantastic Sean Bean is an immediate favourite, complimented by a good supporting cast which includes Eddie Redmayne and John Lynch.

The movies main goal is to set out finding a village that is not affected by the plague and to seek out the evil who might have brought the black death upon England, and to also restore peoples faith in the church where beliefs are fading thinking their misfortune is a punishment from god, though the movie cleverly avoids casting any judgment on people with or without religious beliefs.

The story is certainly told with gripping tension, great action with satisfactory twists to boot, however, many will view and leave this movie, like myself, feeling rather down in the dumps. That said, it would not deter me from recommending this movie to anyone.

A worth while viewing treat that will play on your emotions.
Posted by Dempsey Sanders at 11:39 pm

Great reviews, Dempsey. I will have to check out 13 hrs simply because I love werewolf movies and try to see every one that I can. And I will definitely be checking out Black Death as well. Your review makes it sound quite intriguing. A bonus for me is Sean Bean. He does not don armor and strap on a sword nearly enough in my opinion.

gosh, why is malfoy in a cheap horror flick? i thought he had more potential in him than exploited. definitely not a good direction where this is heading.

ah, I've written about THE BLACK DEATH a few times earlier this year and always had a great response from readers, it seems people like medieval flicks and Sean Bean. Can't wait to watch it myself.

Black Death seems to be appealing to me upon reading your opinion, although it's not released in my region.

The Trick or Treat series has been fantastic so far, there's a whole selection of titles featured that I've yet to terrify my senses with.

Thanks Ed, your right, I saw footage at a festival where the director confirmed it as 18 days, no wonder this film suffered, thanks for your comment, edited it into the review

Medieval flicks, swords and sandals flick like Gladiator and Troy are really fascinating when it foretells an actual events that really happens.

I need to have a loan for my business but my credit its low and that
i have number of unpaid accounts. Id choose to know how am i able to increase my credit score to
get a loan?