Doug MacRay (Ben Affleck) is an unrepentant criminal, the de-facto leader of a group of ruthless bank robbers who pride themselves in stealing what they want and getting out clean. With no real attachments, Doug never has to fear losing anyone close to him. But that all changed on the gang's latest job, when they briefly took a hostage--bank manager, Claire Keesey (Rebecca Hall). Though they let her go unharmed, Claire is nervously aware that the robbers know her name...and where she lives. But she lets her guard down when she meets an unassuming and rather charming man named Doug...not realizing that he is the same man who only days earlier had terrorized her. The instant attraction between them gradually turns into a passionate romance that threatens to take them both down a dangerous, and potentially deadly, path. 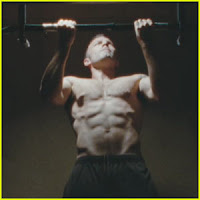 Strong performances throughout this star studded cast, especially Affleck who seems to have gained his ‘mojo’ back with this one after the dyer tripe he has been involved with of late. Not only does he show that he can actually act, and act well, but his directing skills are certainly up to scratch. And hellooo abs! Mr Affleck has a new beefed up image to go with his dashing good looks.
The story has plenty of action and grit, tension and mystery to keep our butts firmly on those seats in this crime thriller that raises the stakes rather than staying safe.
Would highly recommend it, certainly worth a trip to the cinema, and the word is when it does get released on DVD it will come with many bonus features.

It would be a crime not to see it!

references http://www.rottentomatoes.com/
Posted by Dempsey Sanders at 11:41 am

Alright, I am gonna watch it NOW. Am gonna take my arse off my chair and head to my nearest cinema. I had the initial impression I wouldn't like it (from the trailers) but Affleck assures that I'm gonna watch it anyway despite first impression.

I might go check this out today!! Thanks for the write up! Any idea what the bonus features might include?

Certainly the best film of robbery I have ever seen. In comparison, if you have defined an initial heist film, this movie is the best heist film.

Indeed! One of, at least, the funnest movies of the year. That's right. Funnest.

Also, cool site. Great updates - curious for sure about the Nolan brothers on Superman. Thought that franchise was now dead and buried.

Thanks for your kind comments on the blogs new layout, glad its going down well guys.
Re: Lianne J Mac, the extras will possibly include and alternative ending, but not confirmed as yet, but definately a lot of deleted scenes and Behind the scenes.

Re: William Belle, Thanks very much, have and will continue to check your blog, like your work!

Re: Jonathan Mendelsohn
Thanks for you kind comment on the blog itself also, as for updated news on the new Nolan/Superman post, well funny you should mention that, I was working on it as you posted this comment, the new post is now up and the Superman reboot has a new director!


Thanks again for all your comments and questions guys and girls, keep them comming, I WILL get back to you

I'm interested in seeing if there really is an alternate ending. That was possibly the only thing that I would change about this film. But it was great indeed. Nice review, check mine out if you'd like.

I don't consider myself Ben Affleck's fan, but this movie sounds good! Thanks for your review.

You don't have an email address, so I have to reply this way.

That story is hilarious. You must add a part to your blog about personal stories and include that one. It's great.


Since you're into films: http://wqebelle.blogspot.com/2010/07/movie-review-inception-my-dream.html
If you click on the keyword "movie review", you can see all that I've done; on-line since June 1, 2010.


Wow, I just checked out your ranking with the service Alexis.
http://www.alexa.com/siteinfo/411movienews.blogspot.com#
You are way up there! Congratulations, you obviously have quite the following. You should set yourself up with Technorati and see how you rate there.
http://technorati.com/


Have yourself a great day and enjoy the blogging.

P.S. You should remove this comment. I was merely trying to email you back about your comment.

thanks William, I didnt actually know that, must be doing something right ha ha, cheers for that.I will e-mail you so you have my e-mail, it is on here somewhere but I might have made it invisible by accident. Thanks again for your comments. As for the comments on the story I told you, yes i might share it on this blog too at some point.

I got to see it yesterday. Good stuff. It was funny that Affleck added that working-out scene to show off his body LOL. I think Renner did a particularly good job. Now I'm definitely gonna watch Gone Baby Gone.