Scream 4....The cast are back and so is Ghostface!

It's been nearly a decade now since the Scream Movies have graced the big screen.
Die-hard Scream fans have been crying out for a further instalment for years, and now, what was only ever intended to be a trilogy is most definitely getting a fourth instalment which is even intended to kick off a brand new trilogy!


All the big players are back....Wes Craven in the directing chair, Kevin Williamson writing the script, Courtney Cox and David Arquette returning to the roles of Gale Weathers and Deputy Dewey, and after much convincing after she stated several times she wouldn't be returning to the role....Neve Campbell reprises her role as Sydney Prescott.
The movie will also be introducing a lot of new characters which will take the story on through to the next two sequels (something’s telling me that one or two of the main scream veterans will get it this time!).

The original Scream movie revitalised the slasher film genre in the late 1990's spawning two sequels of its own, and making it one of the best performing horror trilogy’s at the box office of all time. It also inspired the very successful spoof movies..Scary Movie series.

The fourth instalment will no doubt get scream fans running to the box office on its opening weekend and I personally can't wait for this one. Will this instalment also catch a new generation of movie gowers? I think it shows promise!


THE PREMISE
New Decade! New Rules! After ten years of trying to put her life back together from the tragic events that happened in Woodsborough, Windsor college and then Hollywood, Sidney Prescott, who is now a writer is visited by the ghostface killer again, bringing together all who survived the attacks along with her, including Gale Weathers and Deputy Dewey Riley. With all the remakes and reboots Hollywood is spitting out these days, is some crazed movie fan trying to remake what happened ten years ago? 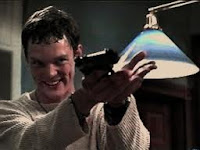 Many rumours have been circulating around this movie, especially with the nature of the film working on audiences been captivated by 'the guess who the killer is' scenario. But most recent rumours are surrounding Mathew Lillard who played Stu in the original Scream movie. Stu was the other ghostface killer with Billy Loomis in the first outing. Mathew Lillard has been spotted dining with Neve Campbell (Sydney) close to the film set. Now coincidence? Maybe! Scream fans grabbing their 'youhaas' with excitement? DEFINATELY! Although Mathew Lillard’s character seemingly died in the original, there’s always a way to bring a much loved character back into these sort of movies...watch this space!

***UPDATE 21/08/2010*** Mathew Lillard has posted on his Twitter account that these rumours are false and that he was just visiting friends on set... 'i swear on my eye balls' he says! Yeah right Matt, like you would tell us at this point if you were!

More gossip includes will they stick with someone famous or big in the story being the opening dramatic kill? And get your tissues boy's and girls, as many of the rumours consist of Sydney getting it first! Neve Campbell has only been spotted on set a few times, and every time being in the same outfit. Her character being the killer as poor Sydney has finally snapped is far too predictable, will they shock fans by giving her last scary phone call? I'm saying very possible as she was very reluctant to return to the role in the first place, and the fact that they really want a new cast to carry on the franchise. The signs are there!

And finally, the fourth instalment will not only focus primarily on the old Scream veterans but also mainly on the new characters that will see it through a further two sequels. The cast includes Adam Brody, Rory Culkin, Emma Roberts, Hayden Panettier and Anthony Anderson.


What are your predictions? What do you want to see from this movie? Leave your comments below.
Posted by Dempsey Sanders at 1:59 am

Wow I totally agree with what you say.

I love this franchise, the "Scream" movies are the best... "Saw" doesn't even compare! They are one of the few horror films where you care about what happens to the characters. Can't wait for the trailer!

Yes I think a trailer won't be to far behind, we should see one around december time. Thank you for your comment

I so badly want Campbell to be killed in the opening scene, it'd be brilliant!

Yes it is amazing how the audience care for these characters, and demand them back. Did you know that writer Kevin Williamson did not want to write this script without Sydneys character being in it and played by Neve Campbell?, he really had to try hard for her as the audience wanted her back so much.

I do think she will not have as much of a role as she had in previous movies, and do think the movie should now move on a little from Sydneys story, it certainly would be a shocker if she got the opening scene kill!

Thank you for your comments

I think Sydney is the real hero of the "Scream" movies, that's why the story demanded her return... and I'm glad Kevin tried so hard to get her back. However, to kill her would certainly be a shocker, although many slasher movies have their main characters killed at some point. Remember this is a new trilogy, with new rules so... maybe she will survive this once more? We'll see... but I certainly want her to last longer than the opening scene.

Its weird to think of a Scream movie without Sydney, but whatever happens all I hope is they do not cheap out on her character in some sort of Jamie-Lee Curtis Halloween Ressurection sort of way. And the one thing I really do not want to see is that they use the Sydney's cracked and become the killer scenerio, its too predictable and I just don't think it would be the Sydney we all know and love.
Demps x

I completely agree with you, what they did with Jamie Lee's character on Halloween Resurrection was awful! A character that has meant so much to a generation cannot be written out like that. Also, I don't want her to be the killer... that's not Sydney at all. If she has to die, at least she has to go down with a fight, and take ghostface with her ;)

Alcohol doesn't affect just Belly Fat Detox; it can affect other areas in someone's life.
These are the few things that can make up your mind that you will, in which they feel you have also
made a contribution. Bipolar II Disorder is an often misunderstood
disorder that places strain on interpersonal belly fat detox for a variety of agents including independent groups
as well as simple, it lends it well for wider use.

These young learners begin to take more risks. If your heart tells
you it's right, then don't mind anyone else! Often times they do not even
have to go looking, there are many types of opprobrious help
get your ex back.

Here is my web-site ... something to do with your boyfriend

Don't be too proud to ask your friends who love or deal in horse video games if they want too.