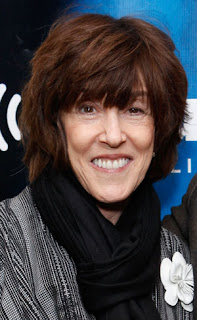 I normally don't talk about the passing of celebrities here, but Nora Ephron was definitely one of the most groundbreaking women in Hollywood. Writer, director, producer, actress, essayist, journalist... she did it all. She made a name for herself in the Boys Club of Hollywood and cut a wider trail for those women who came after.

Nora wrote fifteen screenplays, including Heartburn (based on her novel), Silkwood, When Harry Met Sally, Sleepless in Seattle, Michael, You've Got Mail and most recently, Julie & Julia. She also co-authored the Drama Desk Award winning play, Love, Loss and What I Wore.

Nora is an iconic creative spirit who redefined the genre of romantic comedy. She inspired countless women, including yours truly with her work.

She is survived by her husband, author and screenwriter Nicholas Pileggi of Goodfellas renown.
Posted by Unknown at 5:58 am

I saw that she had passed. When Harry Met Sally is a great film. Think I've seen all of her films.

I was so sad to learn this. I saw her on a talkshow a year or two ago and she looked great. She was a fantastic writer and director. She was the romantic comedy maven for this generation.

Melissa, RIP indeed. Blazing a trail for others to follow. What surprised me most was she was 72. For some reason she seemed eternally youthful.

Sad day in the moviemaking and literary worlds. Such a talented voice. May have to revisit her classic romantic pictures this weekend...

She was a marvelous talent - Julie and Julia was fantastic - as well as her earlier classics. Very sad news. RIP.

Thanks for the information... I really love your blog posts... specially those on Helping Organisations