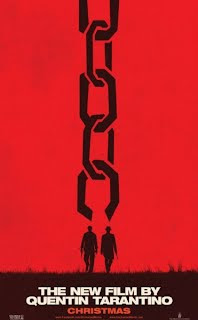 The  film tells the story of Django, an ex-slave turned bounty-hunter determined to rescue his wife from a brutal plantation owner. Can we say, oh hell to the yeah? I have been dying to see this since I first heard the concept. I mean Q and Spaghetti Western... that is a recipe for total awesome sauce in my opinion. 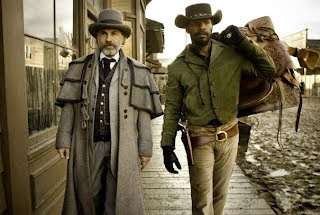 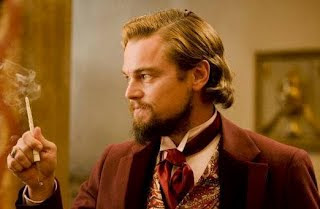 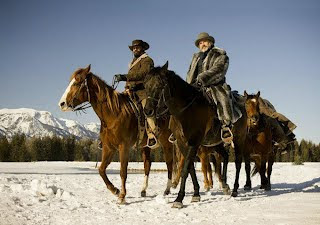 I have to say color me intrigued and impressed. How about you all? Are you as giddy as a school girl for Justin Bieber for this like me? Meh? Or Puhleeze, Mel, another Tarantino film? Don't make me vomit. Talk to me.
Posted by Unknown at 6:05 am

Not that giddy, but Tarantino doing a western sounds wicked cool!

I admit, I'm a huge Tarantino fan. Kill Bill, Inglourious Basterds and Pulp Fiction are all amongst my all time favorite movies. There was a rumor, Tarantino will be making a martial arts movie in Mandarin, which is so my cup of tea. When I found out he held this project back and decided to do Django first I was kind of disappointed.

I hate westerns, but this one looks incredibly promising, plus, the cast is sensational. I'm looking forward to it.

@Alex Most definitely cool. It's all right if you're not giddy. :) I think I have enough giddiness for ten adults.

@George I would LOVE to see a martial arts film written and directed by Q. He would make a great one judging by the Kill Bill films, which are amongst my very faves.

Melissa, I'm not a Tarantino fan although his movies have amazing visuals. Slavery meets western? What a cool idea! Thanks for sharing.
- Maurice Mitchell
The Geek Twins | Film Sketchr
@thegeektwins | @mauricem1972

Wow! My anticipation for this film is insatiable. These photos only serve to intensify my enthusiasm. This film's release date should be declared a National Holiday. I'm sure Tarantino could lobby with Congress.

@Maurice I fell in love with the slavery meets Western concept. I think this is going to be a terrific film and not just because I love Q. :) Glad you enjoyed the post.

@Matt I know!! My anticipation levels are through the roof. I heard he put together a special trailer for Cannes and I would love to get a gander at that. National Holiday for sure.

It does look good - I'm interested to see it.

@Craig It certainly does look awesome, doesn't it? I cannot wait for Christmas. LOL

*hyperventilates and keels over*

I can't wait for this one. End of story. It needs to be in my life now! I must say, I'm kind of intrigued by the fact that Tarantino seems to have completely stepped away from his mob-staple and has moved on to "epic" movies in the original sense of the world--world war II, cowboy films. Fuck paying homage to classics (aka: Kill Bill II and spaghetti westerns), he's creating the classics now.

PS: Why can't I find your Avengers review?? *desperately hunts*

@M I could not agree more. Tarantino is definitely creating classics. I would consider his characters some of the most iconic in cinema. His writing is beyond brilliant and the way he mixes dialogue and scene is truly a wonder. He truly captures those odd moments, those every day bizarre little conversations that we have had a million times with our friends. Only in Q's world hit men and bank robbers have them.

Sorry! I should have posted something here about my review. My Avengers review is a guest post for my friend Russell at 1:37 Exactly. Here's the link http://137exactly.com/2012/05/06/lets-talk-the-avengers/