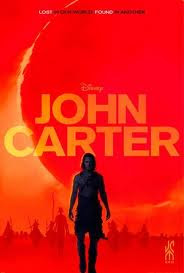 Edgar Rice Burroughs' Barsoom tales roared onto the screens this past weekend with John Carter and it was A plus amazing. This was a special f/x extravaganza that just blew my mind with an epic tale of Good vs. Evil that held me enthralled for two hours.

The film opens in the muted gray and shadowy world of 1881 New York with John Carter bustling about the city being followed by a rather strange man. Cut to an eager Edgar "Ned" Rice Burroughs stepping off of a train, expecting to met by his uncle. Only he's told Carter has died. Whaaa? When he arrives at the Carter mansion, the lawyer gives him the skinny on the mysterious details surrounding his relative's death. Ned then receives Carter's journal and starts to read. Lickety split, we transport back through the Sands of Time to the beginning of John's fantastical journey.

Carter is a broken man, a haunted Civil War vet who was forced to bury his wife and only child. Taylor Kitsch really raises his acting level here. He is far beyond paying his dues as one of the Cardboard Posse from that abysmal Friday Night Lights show. He plays Carter with a depth of emotion that one would expect from a more experienced actor.

John leaves his old life behind and hies off to Arizona after he becomes obsessed with a cave of gold. He devolves into a bit of a lunatic, as inhospitable and mean as they come, only wanting to be left the hell alone to find that freaking cave. Everyone in town basically hates him and wants him gone. Except the U.S. Army, in a strange plot point that is never fully explained. They've got plans for our fair Virginia man.

Enter Bryan Cranston as the dubious colonel, obsessed with having Carter under his command. This bastard will stop at nothing to have him wear the blue. Who knows if it's because of Carter's amazing fighting skills or the thought of having a prominent Confederate under his thumb that drives this guy. Like I said, no good explanation is offered. Unless I missed it while digging for my illegal sugar free Gummi Bears inside my massive bag. Anyway, all hell breaks loose when Carter escapes and the Army is hot on his heels. He leads them a merry chase straight into the Apache. Whoops! When the shooting starts, Carter falls back on his Southern Gent ways and rescues the colonel. He and the wounded Cranston wind up taking shelter in the very cave John has been searching for. Once inside, he fights off a strange blue man, kills him, then wakes up outside. Only this outside is not Arizona. 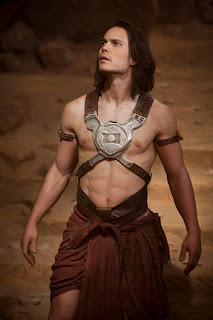 It's interesting to watch Carter adjust to terrain he doesn't recognize and figure out how to walk since, oh hey, his body isn't working quite like it should. Taylor pulls the audience in with his reactions, a combination of dazed shockiness, WTF and how do I get out of here? He plays it spot on for a soldier/hunter who finds himself lost and quite possibly behind enemy lines. Soon his presence is discovered by the local populace of four-armed Martians. Willem Dafoe is Tars Tarkas, Jeddak of the Tharks and Thomas Haden Church is Tal Hajus, a vicious warrior intent on Tarkas' throne. Tarkas and Carter have a great relationship, their banter some of the highlights of the film.

The power struggle in Tharkdom gets shoved to the back burner for a bit when a massive air battle between rival cities Helium and Zodanga breaks out in the skies over the Thark land. John unwittingly helps rescue the princess, Dejah Thoris, played to kick-ass perfection by Lynn Collins. Dejah is no ordinary rich bitch princess. Hell to the no, she is a badass warrior scientist determined to save her people from subjugation. When she tells Carter of the massive conflict going between all the races of Barsoom, he wants no part of it. His priority is to get back home to his cave of gold. He has been scarred by civil war and has no intention of taking up sides again. But Dejah will not be swayed. She has seen his skill set and knows he could help her save her people and all of Barsoom. Time for Trickery 101.

All good plans go awry, leaving John and Dejah in over their heads. The civil war is more than Barsoomian against Barsoomian, it's total manipulation by some very nasty behind-the-scenes politics and shannanigans courtesy of the Holy Therns, a race of supposedly immortal beings who love to drive others to war and destruction. Who better than Mark Strong to play their leader, Matai Shang, I ask you? Mark combines with another popular villain du jour, Dominic West, for a very sly dynamic duo of evil. Ciaran Hinds and James Purefoy are the leader and the captain of Helium, the last holdout against Zodangan domination. It's nice to see Hinds in yet another role where he is not the evil bastard. 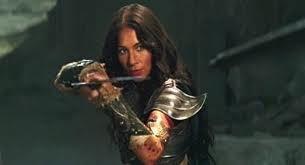 So strap in for a hellagood ride. Ignore the critics who wouldn't know good sci fi unless a laser beam torched their asses from the screen. I loved John Carter. A word of advice, though. Try and see the non-3D version as that aspect of the f/x fell flat and was really unnecessary. And certainly not worth four extra bucks. Of course my fave part, aside from the story, is Taylor Kitsch in a skimpy costume. Low brow, sure, but there you go. Zip it, Peanut Gallery. You all get scantily clad chicks like 99.9 percent of the time. And besides, you do get Lynn Collins to look at. ;)
Posted by Unknown at 1:23 am

Despite occasional moments of silliness, the old-fashioned sense of adventure and brilliantly rendered aliens elevate this above other derivative big-budget sci-fi fare. I still wished that Kitsch did a lot better in this lead role but he was only there for eye-candy really. Good review.

Thank you very much, Dan. I have to agree, there was bouts of silliness, but overall I thought it was a great movie and don't know why it received so many bad reviews. I thought Taylor did a good job, the best acting he's done so far, in my opinion. Was it great acting? No. He did make great eye candy, though. ;)

I was planning to skip this totally - but all my pals seem to like it a lot! I may have to head out to see it!

See it, Craig! I think you'll enjoy it alot. I thought it was fantastic. If nothing else, Lynn Collins makes excellent eye candy. ;)

Knew you would dig it! The whole movie was just epic awesome. I came home from it stoked because that's exactly the type of story I love.
The princess was perfect - shapely and athletic. And yes, she kicked butt!

Oh Alex I loved it! A very inspiring story for sure. I wanted to see it again. :) And I loved the princess. She absolutely rocked as exactly the kind of woman I admire: smart and kick butt.

Wow, it seems you loved it. I didn't. I just liked it. :) The first half was unbelievably dull, and the film was far from being epic IMO. I loved the ending though, it was totally satisfying. The CGIs were pretty amazing, the action was lacking a bit and the 3D was completely unnecessary. My review is coming soon. ;) Yours is FANTASTIC and incredibly well-written, but that ain't a surprise. :P

Thank you so much, George.:) Well sweetie, I'm happy you liked it at least. I agree, that was a very satisfying ending. I can't wait to read your take on the film. :)

Excellent review, Mel. Your enthusiasm is contagious. I feel the excitement from afar and I'm hoping to catch it this weekend :P

Thank you, Melissa! You are one of the few bloggers who truly appreciated John Carter!

People who say that John Carter is derivative of other films – especially the people that judge it purely on the trailers – only show their ignorance of the source material. While Burroughs’ prose is quite difficult to wade through – it tends towards the colorful and romantic – his imaginative ideas and dynamic characters make up for it. That is why I love John Carter so much, because they kept all the wonderful ideas, settings and characters of Burroughs’ “Princess of Mars” novel and surrounded them with an innovative and multifaceted plot.

I’ll continue to champion John Carter to anyone who will listen, because this is the type of engaging, fantastic, imaginative and uplifting film that I go to the theater to see!

Matt, thank you so much. I had problems containing my enthusiasm and organizing my thoughts with this one. LOL I thoroughly enjoyed it. Definitely see it if you can.

Fritz, thank you! Yes, this film definitely got maligned and I don't understand why. I thought it was a brilliant film with a huge, sweeping story for everyone. Your comment makes me want to dive back into the Burroughs' tales.

I actually find the film interesting! Loved the action and of course, the story. Overall, it was worth watching!

@Rebecca Thanks! I think the story was brilliant and the action amazing. I really do hope that they do the rest of the Barsoom tales. John Carter has a lot to offer.

Melissa, nice review. It looks like I'm going to miss this one. I saw the pre-order on Amazon for it, so it's probably heading out of the theaters. Can't wait for Blu-Ray!