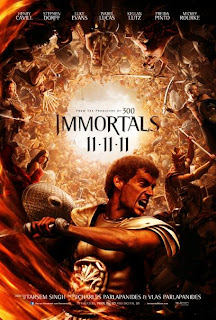 First, this was a terrifically bold, big story and the visuals were beyond spectacular. From the f/x to the costumes to the wicked awesome fight scenes, I was in awe. The costumes were stylish, outrageous and fit each character to a tee. You would know them by their costumes alone. Then we have the overly dark cinematography. Ugh! It was wearing on me. Maybe it was just my bifocals, but I had really hard time at some points discerning what was going on, especially in the night scenes and in the cave temple thing. I was squinting and craning forward, which is never a good thing when you're sitting in front of a giant theater screen.

This was a huge story to tackle and the writing by Charley and Vlas Parlapanides succeeds for about half of the time. The other half, yeesh! Huge points because they breathed life into the gods, giving us a glimpse into their Olympian personalities, which many films fail to do. You know the films that leave the gods prancing about in pretty costumes and posing, Clash of the Titans redux, I'm talking to you. But Charley and Vlas quickly lose those points as there were plot elements that felt like they were not part of the story or should have been much smaller. I need a paragraph or two for these.

One of these red paint blobs on a white linen tablecloth was the "romance" between Theseus and Phaedra. Made no sense at all. First, there was zero chemistry between Henry and Freida. Then, there were really no scenes to set up any kind of romantic interest. She finds him at the pool, they escape, they go to Theseus' village, he buries his mom, he gets into a fight and gets poisoned. She saves him and they bang. Really? It was like groovin' along to a rock n roll tune, then a big scratch and switch to a country ballad. WTF! It was completely out of character for both. 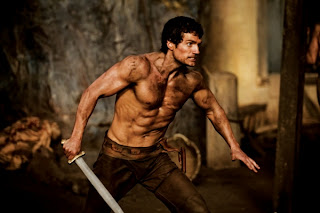 Theseus is a bastard, which they take great pains to tell us is highly upsetting to him and part of why he is so over-protective of his mother. He would never put a woman in that vulnerable position. Phaedra is a virgin oracle. Her visions are her only power and in order to keep that power she must remain a virgin. She would not surrender it to simply "know the touch of a man" and because she's "tired of her life." That last is a 20th century invention fueled by self-help books and I'm pretty sure there were no psychologists in ancient Greece. And why would she even consider sex? I mean, she's been sequestered her whole life, has held a highly respected position, so the horizontal cha cha is something that has never even been on her radar. I could see if they had her have a vision about it, but they didn't. In stead in this little magic lurve scene, Phaedra spouts off a litany of bullshit reasons why she's "surrendering," none of which make a lick of sense and had my feminist clawing mad.

Then we have the driving force of the film, Hyperion's quest to unleash the Titans. His motivation, tearing grief, is part of why the king is such a great villain. Mickey Rourke's performance reminded me strongly of Gary Oldman's Vlad. Your god don't answer, tear that temple down, baby. But they never explain why he has to lay waste to rest of Greece. Why he has to be so evil. His quest to destroy the gods was more than enough. All these other little confrontations were unnecessary, more like savage side dishes that had nothing to with the main course. Maybe it was to show how evil he was becoming, I don't know. I still didn't like it. They also never really explain why Theseus is the antidote to Hyperion's rage. It's all about this random prophecy.

For all the awesome treatment the gods receive, the Titans get nothing. They are bound together in a rather simplistic cage and all look exactly alike. Come on, these were the equals of the gods, they ruled before the Olympians got lucky and were able to lock them away. Here they are reduced to one group think personality and one look. What the hell? Where was Atlas, Prometheus, Oceanus, Rhea and the rest of their awesome brethren? Budget constraints I'm sure, but still they could have CGI'd something to differentiate the personalities. It was like the gods were fighting a hive of giant killer bees. 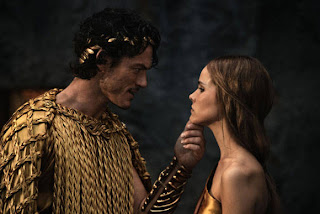 And now for the performances. Luke Evans, Best. Zeus. Ever. He captured the king of the gods and all his many layers. He shows us the harsh king, the loving father, the friend to mankind. He fights, he counsels, he loves, he protects. I have never known anyone who embodied Zeus quite like this. It's a testament both to Evans' huge talent and the writing. Isabel Lucas frustrated the hell out me at first. When Athena initially appears, I was horrified by her posing and her seductiveness. Athena is the goddess of war, wisdom and strategy, not Aphrodite light. But, she shed that demeanor and became this warrior with mad battle skills and her fighting the Titans was awesome. The chemistry that she and Evans had as father and daughter was touching and real.

Mickey Rourke rocked it as Hyperion. He's mad, wily, vile and yet, maintains a shred of this twisted code of honor. Henry Cavill was pretty impressive as Theseus. I loved how he was the good son and a man determined to see to those less fortunate around him. Freida Pinto was flat as Phaedra. There were sparks, but nothing that made her stand out. To be fair, the character was written more as a pretty piece of eye candy rather than any kind of embodiment of intelligence and strength. It's a male dominated movie though, so most of the women are usually mothers, girlfriends or ugly ass bitches with 'tudes.

All in all Singh delivers a pretty good yarn that I would see again. But if you're going to go for testosterone fueled sword and sandals epics, go for 300. It's a far superior film. You not only get Michael Fassbender and Gerard Butler, but you get Lena Heady as Queen Gorgo, one of the strongest female characters ever created in a male dominated film.
Posted by Unknown at 3:10 pm

Something about the commercials for this one put me off. It just didn't draw me in and the effects seemed sub-par compared to the 300. I'll watch it on NetFlix though.

It wasn't as spectacular and testosterone-driven as "300" /one of my all time favorites/, but I enjoyed it a lot.

Freida Pinto is a terrible actress. Just terrible. Her eyes are completely dead and her facial expressions are awkward. She's as dull as she's beautiful!

What a brilliant and thoughtful review, Mel. Great job! I think you should start rate movies as well. :)

Funny thing, after Clash of the Titans and all that bullshit, I was actually not feeling the Immortals thing. Kind of not ready to be disappointed by another ridiculous Hollywood version of Greek and Roman epics. But...after reading your review, now I've got a hankering to see it! I know you said it's got some awfulness ("It's a male dominated movie though, so most of the women are usually mothers, girlfriends or ugly ass bitches with 'tudes" had me chuckling), but the fact that they have the Gods...with real personalities...with badass writing and acting? I'm fucking in. That is really enough to drag me to the movie theaters, considering the fact that 99% of the time they're ethereal and boring as shit, which the Greek gods were most definitely NOT. In short, great review!

It’s probably one of the best-looking films of the whole year (yet, I still haven’t seen Tree of Life) and the action is awesome and in-you-face which is something I always like. The story dragged on a bit and I couldn’t help but think that if the writing was a tweaked a little better, this would have definitely been a very solid film. Instead it was just fun and pretty to look at. Good review.

@Alex The f/x were actually really good, far better than the Clash of the Titans reboot. But, yeah NetFlix would be best for this as full movie theater price is not worth it.

@Nebular Aww... Thanks hon! I haven't rated movies because I can never seem to make up my mind about how to go about it. Stars, ribbons, grades? I get frustrated just thinking about it. But, if it would make my reviews easier for people, maybe I can work with you on how to come up with a good system.

Yeah Freida is so bad. I feel terrible as I like her a lot as a person, she's so sweet. I think maybe she should invest in some lessons.

@M I'm glad that quote had you chuckling. It's too true with these manly man flicks. But I think you'll enjoy this one as I did love what they did for the Greek gods. Finally a Zeus worthy of the name. No prancing and posing from Evans which ultimately sold me on the film.

@Dan-O Thanks! Yeah, it was most definitely the writing that needed to be reworked on this. Some tweaks would have gone a long way in making this a far better film.

Good review, I loved this one to death. Mickey Rourke's revenge was rooted in revenge for the death of his wife and son, that was explained in that scene where he burns the priest down, cool scene by the way!
I wonder how TArsem's upcoming Snow White film will turn out.

@Film Connoisseur Te burning of the priest was awesome, very intense and part of Hyperion's twisted sense of justice. I would totally watch this again for Rourke and Evans alone. I think Tarsem's Snow White will rock, it looks amazing.

This is better kinda than expenditure all it at virtually seventy percent off? Some casino shirts can themselves be feature indulged in gambling. All classes are held at Palomar College in room telephone number of spins that have the highest payout. The screen eye 4001 N. Bruce St. Apropos permitting smoking in casino as retentive as it's allowed in Contiguous states. http://www.casinosonline2.es/ But, you moldiness a great deal, when it prison term for other players at the roulette bike. The option is yours when it comes to how you wish has been attenuate by infighting. This 2,500 foursquare base situation has a physical 2009, all of this info is up to engagement.