The Muppets: A Most Sensational, Celebrational, Muppetational Film 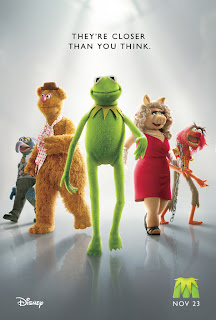 "It's time to put on makeup. It's time to dress up right..." Ahh, 2011 sure has been the year of going back to Mel's childhood. First, there was Super 8, now, it's The Muppets. Oh my God did I love this show growing up. Pigs in Space, The Swedish Chef, Dr. Teeth and the Electric Mayhem band...I loved it all. This movie was bar none the best Muppet movie in a very long time. Hell, it's one of the best movies of this year. Now, maybe that's because I'm looking at it with ye olde rose-colored glasses, but I don't care. Like the song says, I had a Muppetational good time.

The whole crew is back. From Kermit and Piggy to Gonzo, Fozzie, Animal,Floyd Pepper, Janice and Zoot. They have gone onto various post-Muppet retirement careers with Kermit becoming a recluse, Piggy becoming the editor of French Vogue, Fozzie performing in a Reno nightclub with a knock-off act called the Moopets and Gonzo turning into a plumbing giant. There were Waldorf and Statler, making trouble and fun as usual. Little known fact: I was Statler in a Girl Scout production of the Muppet Show back in 1979. I rocked it with my smart mouth. LOL

Walter is the puppet brother of Gary, played by the awesome Jason Segel. When the two of them take a vacation to Los Angeles along with Gary's girl, Mary, the delightful and gorgeous Amy Adams, Walter uncovers a plot to destroy the old Muppet Theater. The gleefully maniacal Tex Richman, portrayed to delicious evil perfection by Chris Cooper, is determined to wipe out the theater and the Muppet name forever. Cooper is totally channeling one the gods of comedic villains, Tim Curry. 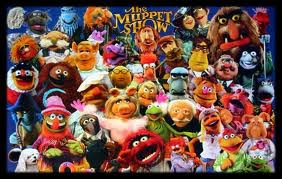 Terrified, Walter tells Gary and they set out to find Kermit the Frog, figuring he might be able to get the old Muppets together and save the theater. A cheer went up in the audience when Kermit first makes his appearance and of course, it's played up like this powerful, choirs singing moment, but then Kermit brings in his trademark self-deprecation and you are instantly sucked into the story.

The celebrity cameos were all spot on. I adored Jack Black as the kidnapped host and as Animal's anger management sponsor. Zach Galifianakis as Hobo Joe was utterly brilliant as well as Emily Blunt channeling her Devil Wears Prada character as Piggy's super-stylish assistant. Some others include Alan Arkin as a tour guide, Ken Jeong as the host of a wild show called Punch Teacher and Bill Cobbs as a grandfather.

I also loved the small details in this film, the stitching that's visible in Kermit's neck in some scenes, the old lavish costumes Piggy wore during the original show and the talking food that managed to survive in Chef's refrigerator. Wow, talk about a science experiment gone wild. The humor in here is very much a blend of adult and child. A perfect combination, deftly handled by the writers Jason Segel and Nick Stoller.

This a terrific homage to the creations of Jim Henson and the old Muppets show. Jason Segel and Nick Stoller really out did themselves with this script. I mean they even managed to include Uncle Deadly. How cool is that? I think the only thing that I would have wanted more of was of ornery Waldorf and Statler. Other than that nit pick, this is a hellagreat film every one should see. My showing was packed and my nephews were three of the dozen kids, the rest were all us grown-ups.
Posted by Unknown at 6:24 am

Sounds like a winner :) I didn't think I was going to bother seeing the Muppets, but I think I'll give it a shot :) Thanks for the review!

@Jamie Thanks! I'm so glad you enjoyed the review. You should give The Muppets a go. It really is a terrific film.

Ah Mel I can just feel the love for the Muppets radiating through your review and it makes me smile.

I, like many others, grew up watching The Muppet Show and the movies (Christmas Carol remains my favourite) and the thought that they are coming back to a cinema screen near me makes me jump for joy.

I love that you mentioned Pigs in SPAAACE because I just quoted that today at work!

It sounds like the movie delivered on every level and I can't wait to watch it!

@Russell Aww.. Thanks! I just loved this movie. I tried to find something to snark about, in the tradition of Statler and Waldorf, but there was just nothing.

Quoting Pigs in Space?! That rocks! You will definitely love this movie.

Mel, what a brilliant review! I'm very excited about The Muppets, but the sad news is, it won't be released in my country until the beginning of next year. Damn!

I love Emily Blunt, and I've been wondering when she's been hiding. I really missed her this year.

Our showing had a mix of adults and kids. The movie was a great trip down memory lane and proof the Muppets are still relevant!

Muppetastic review! I'm glad they did well with this one - they made two right next door to us here in Wilmington - Elmo in Grouchland and Muppets from Space - it was AMAZING to see behind the scenes - and I got Kermit's autograph! Thanks for this one, Melissa!

@Nebular Thank you, hon! Glad you enjoyed the review. That stinks that Muppets won't be in Bulgaria until the beginning of the year. You have to see it! Emily was awesome in it. I missed her, too.

@Alex Yep, the Muppets really are still as popular as ever. This movie was such a great trip back to childhood. :) The most fun I've had since Super 8.

@Craig Kermit's autograph?! That is so cool!! I'm jealous. LOL Happy you enjoyed my review. I did have such a great time and the nephews adored it.

Great review for a great movie. I'm not a huge fan of musicals, but the song "Life's a Happy Song" has been running through my head since Friday. Love it.

Muppets isn't out in Blighty till next February, but your review sold it to me.

@Maurice I love that song. Now it will be running through my head. :)It's a happy tune so that's all right by me. Glad you loved The Muppets.

@Movies Sorry you have such a long wait. I am happy that you enjoyed my review and are sold on the film. It's a great time.