Frodo Is A Serial Killer 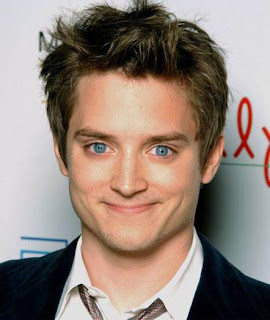 Remember Sin City and the shock of seeing cute little Frodo, Elijah Wood, as Kevin the Cannibal? Ewwww!!! He was awesomely intense and completely vile. Well, kids, Deadline reports that our dear hobbit will once again appear in a villainous role, this time as a serial killer in Maniac.

Wood, who is reprising his role as Frodo in Peter Jackson's The Hobbit, is set to start shooting this diabolical sounding indie later this year. Check it. Elijah will be playing a man who works in antique mannequin shop (now that just screams serial killer) who finds his victims on line, then stalks them like a cheetah after baby gazelles. In the meantime, he suffers from debilitating hallucinations, which throw him back to his hellish, abusive childhood. Ahh mother issues, another serial killer trait. This twisted-sounding gem of a flick will be directed by Franck Khalfoun and produced by Alexandre Aja and Gregory Lavasseur. 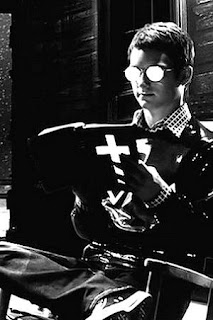 You know, I think it's his eyes, one minute so sweet and the next so dead, but I could totally imagine waking up from a drug-induced coma and finding myself cuffed to a pipe in Elijah's basement with him crooning "Mr. Sandman" and cradling a blade. I'm weird, I know. LOL

This sounds interesting. i think Elijah is a good actor, he is not merely a cute little guy. I look forward to see it

@Novroz Elijah is a great actor and I am looking forward to seeing this myself.

Not a huge fan of Elijah. In my book, he's a one-trick-pony. It will be nice to see a different side of him though.

yes, I agree with those who think he doesn't really know what to do with himself in his career. Not a bad actor, he was brilliant in LOTR, but he is just not versatile and appealing in different genre. And that show he has currently, doesn't help him at all. He has the same problem as Toby Maguire.

Wood could be good. He has kind of an Elfin quality. That scene where he's being eaten alive is still burned in my brain.

He was creepy in Sin City. Why not branch out? Although some people never shake the image. For example, I can't picture John Cusack playing a serial killer.

Alex - what about Grosse Pointe Blank?

MB - you know this makes him the last of the four Hobbits to play a killer - Billy Boyd as the Seed of Chucky; Dominic Monaghan as one of the conspirators on the ill fated Fast Forward; and Sean Astin as one of the murderers on Monk; maybe they can all go get another tattoo!

@Nebular He is kind of a one note guy, but he is getting better. He's hilarious in Wilfred, his new F/X comedy. I can't wait to see this.

@Dezz He does make me think of Tobey Maguire. Hopefully this role will help him expand his repertoire. I actually like Wilfred. I think it's hilarious, but then I do have a rather strange brain. ;)

@Maurice I think Elijah will do a great job. He was spectacular as Kevin and yes, that scene still sticks with me.

@Alex Hopefully Elih=jah can shake his image. Doesn't help that I still refer to him as Frodo, doesn it? ;)

@Graig Grosse Point Blank is a classic. I love that movie. John and Dan are terrific.

LMAO, they should get another tat...serial killer in Elvish.

He's a great actor. I'm sure he'll be great, though I won't see it. Sounds way to creepy for my tastes.

He's such a good actor. I didn't care for Sin City, it was too violent for me. But I had to admit that Elijah Wood scared the heck out of me.

I really like Elijah, even if he is a bit one dimentional at times. I think he might rock in this , great review Mel

I don't know. Elijah's too clean-looking to take on a role as dark and gritty as Frank Zito. Not that I'm saying he can't take on the role, just that it might take me some time to get used to the idea...