A New Installment For Blade Runner 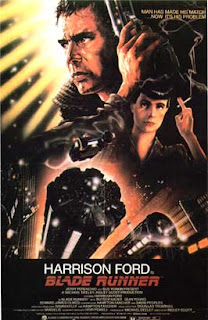 Oh my God!! I am so excited I had to post this even though I am on a self-imposed hiatus because of a story deadline. Exceptions will be made for wicked cool news, though. One of the definitive sci fi pictures of all time, Blade Runner, is getting a sequel, prequel, oh hell another installment and it will be directed by none other than Ridley Scott himself. Yay!!!

He has stated that it will not be a remake, quelling immediate fears that he had jumped the shark and decided to redo his epic. Alcon Entertainment acquired the rights to prequels and sequels in a deal last March and knew right away they had to have Scott on board. According to producer Andrew Kosove in a statement to The Wrap, the filmmakers have not hired a writer nor have they figured out exactly what the new film will be about.

For those of you living under a rock, not into sci fi or are too young to really remember, Blade Runner is the 1982 cult classic film loosely based on Philip K. Dick's story Do Androids Dream of Electric Sheep? Directed by Ridley Scott with a screenplay by Hampton Fancher and David Peoples, the film follows burned out Blade Runner Rick Deckard, played by Harrison Ford, on a final assignment. He is charged with hunting down a brutal group of escaped replicants, organic robots that look human, as they attempt to evade capture and seek out their maker. The movie co-stars Rutger Hauer, Daryl Hannah, Sean Young and Edward James Olmos.

Here's a look at the original theatrical trailer. What a masterpiece!

So, what do you think? Are you excited, mad, disappointed? Should they leave well enough alone? Or are you looking forward to another visit to this dystopian world?
Posted by Unknown at 5:09 am

I wish I was as excited as you are about this sequel, but I'm not.
I thought the original was a visual masterpiece, and yet, I found it dull and rather souless.

I tried watching the original film, and I know it is a classic, but it kept making me fall asleep and I could never get pass the first twenty minutes or so.

Blade Runner is a masterpiece. It is slow, but the performances make the film, especially Rutger Hauer's. His final words are powerful and a favorite quote of mine.
Not excited about another installment, but at least it's not another remake.

Wow. I am shocked, the lot of you - except for Alex. It's a brilliant movie. I've seen it in theaters twice in different versions, and rank it amongst my all time faves. There's just something about it - a tone, a feeling, an atmosphere... that Scott achieved with this movie that few others have managed. That said, not sure where they're going to take a sequel, but with Scott on board at least the recipe is off to a good start. Thanks for the heads up, Melissa! Your hiatus from your hiatus is much appreciated!

I was really surprised to hear this. I'm with Alex, I'm not too thrilled about a "sequel" or a prequel, b/c I think the original was so good. But at least Ridley Scott is the one doing it.

Thanks for the update Mel!

It sounds like you're all kinds of psyched for this one! I hope it can live up to the hype already, even without a writer on board yet.

I was a little too young when this one first came out but caught it not too long afterwards. It was good but I wouldn't count it in one of my favourites though and I am a little concerned that Ridley Scott is revisiting the film after such a long break...however I am trying a new thing where I am trying to reserve judgement until the finished product because I have enough faith in the director that he wouldn't come back to this story unless he had something really good to say...so only time shall tell.

Hi my name is yogesh kumar. I like this blog website. I say thanks to that person who made this
www.today-life-style.blogspot.com

Never really goy BLADE RUNNER, though it is visually brilliant even after all these years. I noticed Lady Gaga is aping Daryl Hannah's look from the film in one of her videos.

Oh Glob, yes! I never liked it at firs viewing, but after the second and the third, I'm starting to see why it became a cult hit!