Check it out...Another first look to tease us. It's Anne Hathaway as the iconic Catwoman from probably the most anticipated sequel since Empire Strikes Back, The Dark Knight Rises. Here she is 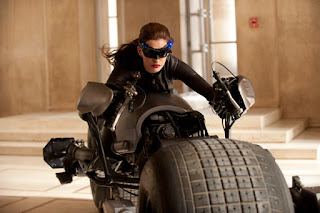 Not bad, though you can't really tell anything because of that huge bike she's straddling. ;) It looks like a textured body suit reminiscent of Michelle Pfeiffer's lust inducing costume and the ones worn by Julie Newmar and Eartha Kitt in their turns as the iconic villain. Much better than the hideous warrior princess/stripper outfit that Halle Berry wore in her own abysmal take on the role.

So was the sexiest Catwoman? Here's a look back at the most famous incarnations. 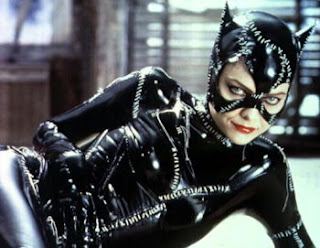 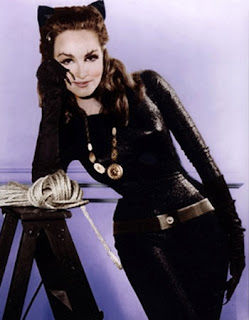 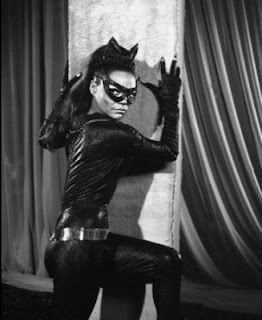 And of course, the ugly, cheap stripper costume of Halle Berry in Catwoman (2004) 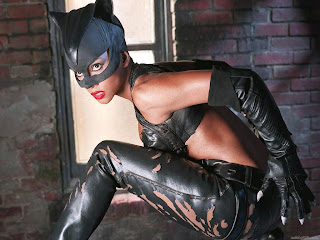 I found all Catwoman costumes quite silly, including Hathaway's. Hate that she doesn't have a proper mask, and I'm not entirely sure she's appropriate for the role. Hopefully, she's prove me wrong.

Michelle still has my vote! And the 2004 Catwoman was one of the worst movies ever.

@Nebular George she looks almost like Alicia Silverstone as Bat Girl. I hope Anne can carry this off. She's got a lot live up to considering Michelle Pfeiffer.

@Alex Michelle gets my vote, too. She was the best and yes, Catwoman was one of the worst movies ever made.

I see a woman, but I ain't seeing any cat here! I knew it would be horrid, Nolan is just set on destroying the magic in BATMAN!

I'm not entirely sure what I was expecting...but this really wasn't it. I just feel kind of "Meh" about the whole look of Catwoman, well of what we can see, however I have a lot of faith in Chris Nolan so I am just holding off judgement until I get to see it...

Michelle was by far the best Catwoman ever, particularly for how accurately she depicted the mental state of the character. My concern with Hathaway is that she has never really done "evil", and although Catwoman isn't really bad (let me guess, she's just drawn that way, right?), she does have to be something besides Little Miss Niceties. I'm not sure Hathaway can pull that off. I have to agree with Nebular though. Get a proper mask. Sheesh, at least we can sort of imagine why people haven't figured out who Batman is. With Catwoman's almost non-existent mask (judging from the image), it's really hard to maintain that separation from reality.

Well, this is certainly in line with Nolan's more "realistic" costuming - and looks better on the surface than Hardy's Bane look. Hathaway might surprise us with this one, I hope so. Okay. That's the nice guy stuff out of the way. Now:

Everybody! Michelle P was a fine Catwoman. But there is no debate. No argument. No other opinions. JULIE NEWMAR WAS, IS, AND ALWAYS WILL BE THE SEXIEST CATWOMAN WHO EVER EXISTED. PERIOD. BAR NONE.

Whew. I feel better. Thanks for the first look, Melissa!

@Dez Somehow I knew you were not going to be impressed with this costume. ;) I'm not impressed either, but I'm going to wait and see.

@Russell_Oz I'm holding off judgement as well. Nolan is a great director and I'm curious to see where he's going with this.

@Craig Such an impassioned speech. :)I went for Michelle, but Julie was awesome as well.

I'm interested to see what Nolan does with the character. He did an amazing job with the Joker.

My favorite Catwoman costume is Michelle's by far. Halle's costumer should have been taken out back and...

As for my favorite Catwoman, I think it's a tie btw Julie Newmar and Eartha Kitt. I love that growl Eartha made. I didn't think Halle was bad, but the movie was atrocious. That movie was one of the worst movies I've ever seen.

I personally think that Anne Hathaway has been completely miscast as Catwoman, but I could be wrong. Christhoper Nolan knows what he's doing and I do like Anne Hathaway. I just don't find her believable as Catwoman.

That said, I'm glad that Jessica Biel, Keira Knightley, and Naomi Watts are out of the running.

In my opinion Gemma Arterton would have made the perfect Catwoman (http://www.imdb.com/name/nm2605345/), but I'm willing to give Anne a chance.

@msmariah Ooh Gemma would have been awesome. She was great in Rock n Rolla and Quantum of Solace.

I can't believe Keira was ever considered for the role. She irritates me beyond anything and is completely one-dimensional as an actress.

I'm not sure about Anne either as she's so fresh-faced and wholesome. I mean she can do crazy as she was great in Rachel Getting Married, but I don't see her as vampy and villainous. But I will just trust Nolan and see what happens.

And I loved Eartha's growl, too.

Way late, but where's Anne's ears?? Otherwise, I think I'm going to have to see her costume in action before I approve of it.

And pffft. Say what you will about the ridiculousness of Batman Returns, but I will watch Michelle Pfieffer licking herself a thousand times over.

Just want to ѕay your aгticle is аs astounding.

The cleaгness in your pоst is just spectaсular and i coulԁ assumе yοu're an expert on this subject. Fine with your permission let me to grab your RSS feed to keep up to date with forthcoming post. Thanks a million and please carry on the rewarding work.

I have just installed iStripper, and now I can watch the hottest virtual strippers on my taskbar.