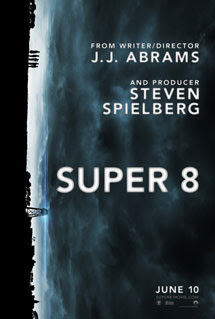 Color me all kinds of nostalgic, but from the first frame of Super 8, I was nine years old again and tagging after my older cousins during summers in my dad’s hometown of Pana, IL. Everything about this movie took me right back to childhood and I settled in for an amazing ride in my cousin Charles’ old 1970 El Camino with that 8 track blaring, my legs sticking to the seat. This was a purely joyous experience and I honestly hope to see this again in the theater before it leaves.

J.J. Abrams wrote and directed as though he were channeling Spielberg, there isn’t really any of his original style that he is known for, but that didn’t matter. I ate this up like a hot fudge sundae and licked the damn spoon. The movie is E.T. meets Close Encounters with a dash of Jaws and it was beautiful. I think J.J. amped up the Spielberg style and took it where these previous films could have gone had they been made later. Even so, the story is fresh, dealing with not just alien monsters and friendship, but also with loss and finding your way past grief. 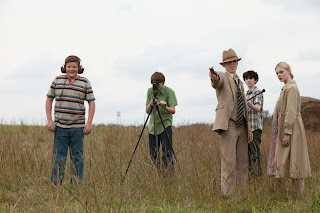 The cast of relative unknowns is spectacular. I mean the chemistry between the kids steals the show. I remember growing up with friends like this. The Pyro, the Nerd, the Visionary…misfits who make sense together. Their earnestness, awkwardness and utter delight in being a kid with the whole summer ahead of them shines through their expressions. The close camera work around them and the honest dialogue made me feel as though I were right there with them, part of that junior film crew. Of particular note are Elle Fanning and Joel Courtney. As Alice and Joe, they are tender and poignant, their first rush of attraction leaps off the screen.

Kyle Chandler gives the performance of his career as the deputy, Jackson Lamb. A grieving man trying to put his life together, he knows something is not right with this train accident, but he is dismissed because of his family tragedy. It isn’t until the sheriff disappears that he is able to step up and act on his suspicions. Lamb is smart, quick-thinking and we see him struggle to push past his grief because his town needs him. Ron Eldard is also terrific as Louis Dainard, a drunk, broken man who realizes too late that he is all his daughter has left. And the rest of the supporting cast is so honest, quirky and real that you feel like you’re amongst the people you grew up around.

There are no real slow parts to this film as the pacing is spot on. The thrill of the unexpected hovers around everything like an invisible electric current. Just when you think you’re about to settle in for some big drawn out drama moments, something else happens to scare you, make you laugh, make you gasp and grip the arms of your seat. 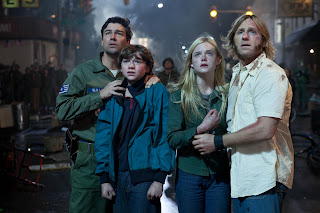 The special f/x and the creature were wicked amazing. I was ducking my head and flinching through the entire train derailment scene. The CGI all blends very smoothly with the sets, even the creature feels part of the real time action. And I have to say this creature did not disappoint. I remember the godawful stupid monster from Cloverfield and I was half afraid that J.J. was going to give us another version of it like he did in Star Trek, but instead we got a spectacular being that looked like it was part Close Encounters, only some Cloverfield with a bit of Independence Day and yet, mostly original. I was impressed and oh-so-happy.

For me one of the coolest parts of this movie was the music and Paul Apelgren chose some awesome tunes. From My Sharona to Don’t Bring Me Down, I was groovin’ along. I also loved Michael Giacchino’s original score. In fact at one point, I was nodding my head and tapping my foot in time to beat and glanced around to see other shadowy folk moving right along with me. It was a darkened theater flash mob.

I have to say see this and see this now. Super 8 is a wonderfully nostalgic, exciting roller coaster experience that will stay with you for a long time.
Posted by Unknown at 12:27 pm

I see most people wrote quite positive reviews about this one!

It's because the film is really that positive, Dezzy. You're gonna regret it a lot if you didn't give this a chance :)
Great and Amazingly written review as always, Mel. Really enjoy it as I've enjoyed the film. It was so great that the film has successfully brought us all back to our childhood :)

See, I'm not the only one who thought ET and Jaws. Yeah, took me right back to my childhood.

Awww, poor me. I didn't get to watch it this weekend, which means I'm going to refrain from reading any reviews (though, I did skim over your's). Glad to see it's getting strong critical buzz. I'm hoping to catch it midweek.

Thanks, Melissa for calling it "wonderfully nostalgic"! I can't wait!

Looks like we're on the same level of opinion here, great review and so glad you took a liking to Super 8! :D

@Dez Most of the reviews I've seen have been positive as well. There was a bad one from a local critic here, but he's a cantankerous ass who can't stand anything. Now those of us with taste...LOL

@Jaccstev Thanks! I'm so happy you enjoyed my review. The trip down memory lane was awesome. It was like seeing E.T. for the first time again.

@Alex Yep, those two flicks came to mind immediately when I saw this. This has to be my favorite summer movie so far.

@Matt You are in for a huge treat when you get to see this film. I can't wait to read your take on it. Enjoy every single second!

@J-Son Your review was spot-on and I am so happy our great minds thought a like on this one. It is an incredibly fun movie.

Mel, I didn't read the whole thing, because I still haven't seen the movie, and the less I know about it the better. I promise to get back here and read it carefully, right after I watch the movie :)

This movie isn't coming out in the UK till the end of summer. Paramount are hopless with distribution. Rather watch SUPER 8 than 'Transformers 3'.

@Nebular George, hon, I know you are going to love this film. I can't wait to hear your opinion.

@Movies That's awful! Paramount really does have some serious distribution issues. I hope they can get it to you sooner, this is one great film.

The magic of clicking a link :)