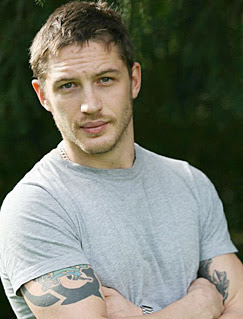 Warner Brothers released a first look at Tom Hardy in full gear as the super villain Bane from the new film, The Dark Knight Rises, which is currently shooting in Jodphur, India. Production will later move to Pittsburgh, PA, which has taken over for Chicago as Gotham City.

The film, which is the third and reportedly last Nolan helmed Batman flick, is due to hit theaters in July of next year. However, there is rumored to be a teaser trailer coming with the July 15 release of the final Harry Potter movie, Harry Potter and the Deathly Hallows Part Two.


All I can say is... Wow! Smokin' hot Tom looks like something straight out of a nightmare. He is the scary monster under the bed that will make you cry for your mama. 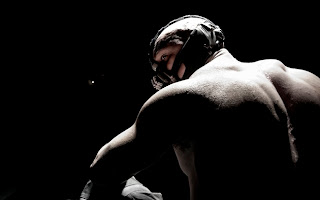 poor Hardy, what did they do to him???

Hardy looks great from behind too! LOL.

Thanks for this bit of news. I can't friggen wait! Hardy is going to give an awesome performance.

Looking forward to the teaser then!

@Dez I know! They turned all that luscious man into one hell of a monstrosity. He's going to be a great villain.

@Nebular George, LOL He does look good from all angles in my opinion, but man what they did to turn him into Bane just stuns.

@Mind I absolutely agree. Tom sure is walking sex sans his Bane get up.

@Matt I knew you'd appreciate this bit. Tom is going to rock as Bane and I cannot wait until this film is released. I hope the trailer rumor is true.

@Alex Me, too! I really, really hope there is one. It would make perfect sense to whet our appetites further.

I'll admit that I didn't know Tom Hardy until Inception, but I'm very excited to see him as Bane. He looks pretty damn scary, and I hope Nolan will make him more intelligent than Schumacher's effort :P

@Jamie I agree. Schumacher's version was a horrible, clownish effort. Nolan will certainly do the character justice.

I am hopeful that this will do the series justice, and this helps support that hope. I honestly don't know what it will take to out-do the Joker from the previous movie, but even if they come close, it'll be worthwhile.

@Eric I wholeheartedly agree. Seeing Tom as Bane looking like this really amps up my excitement for Nolan has in store. It will be tough to outdo the Joker, but it looks like they are certainly putting forth tremendous effort.

@Harry It is a great casting choice. And thank you very much. You have a great week as well.