Scre4m: Will Gale Weathers scream for the last time? 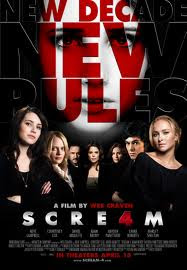 Scream 4 hit’s the theatres this April 15th which will be set 10 years after the events of Scream 3. Neve Campbell, Courtney Cox Arquette and David Arquette are all reprising their roles and the movie has been confirmed to kick off a brand new trilogy, which will focus on mainly a new cast.

Scream 4 had its own audience test last week, and the feedback had been mainly positive, even some saying it is the best one since the original, and though these comments may come from die hard fans that have been longing for another sequel for years it does show some good optimism for the new instalment.
Even though it received an audience screening luckily not many details have been spilt to ruin it for us, especially when this sort of movie thrives upon guessing who the killer might be.


However what is creating a lot of gossip is the fact that this could be Courtney’s last portrayal of nosey reporter Gale Weathers. Though her public split with real life hubby David Arquette was bound to create rumours of them both not being able to work together on future instalments of the franchise, both David and Courtney have deep respect for their roles and have stated that they will not let their professional work hinder because 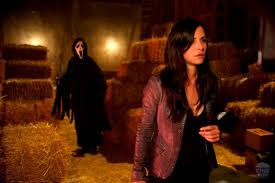 their personal life.
Her fate does seem somewhat in jeopardy though which is teased in the official trailer (see below). Also it has been revealed by Scream 4 director Wes Craven himself that Courtney Cox had spent considerably less time than her husband David on set, her scenes were shot over a month before many of the cast including David’s were finally finished last September.
Will Gale scream no more?…Not so fast, a source has commented stating that he was an extra on set and the reason why Courtney’s scenes were shot as fast as possible were to accommodate her trips back to LA to film the new season of Cougar Town in which she headlines. Also, if it were true that Gale finally ‘gets it’, would Wes Cravens team really give that much away in the trailer if it were not for some twist we did not expect? I’d be inclined to believe the latter, but with this new instalment that taglines ‘New Decade New Rules’ one things for sure that all bets are off, and even the main veteran Sydney Prescott (Neve Campbell) could meet her demise this time. 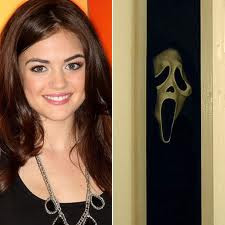 In other Scream related news:-
Pretty Little Liars actress Lucy Hale is set to follow suit in the opening kill scene made famous by Drew Barrymore in the original movie. All but confirming she will be killed rather quick when she revealed that she had a few scenes at the beginning of the movie and that she had to sign ‘stuff’ preventing her to reveal her fate, but very excited to be a part of it.

Wes Craven has stated several teases on the upcoming sequel, one of which is that Sydney Prescott has never returned to Woodsborough, home to the gruelling events of the first chapter until now with her fathers funeral.
So that’s her father out as a suspect as he’s dead…..or is he? Or could it be with all the emotion and past trauma Sydney finally snaps? We will all find out in 3 months time!
Scream 4 Trailer:


OTHER NEWS: Will you be arriving in your tux? 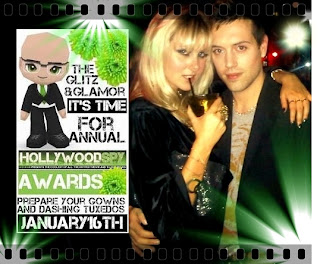 It promises the best glitz and glamour and many editors of top blogs amongst the blogosphere are due to arrive on the red carpet to enjoy the much anticipated event.

So why not join host Dezmond over at Hollywood Spy tomorrow- but make sure your outfits and speeches are ready, you never know, you might be pleasently surprised.
Posted by Christian James at 3:52 pm

Oh, Chrissy's taken over the realm!
I've never really got into SCREAM saga, I believe you must be a bit tipsy or high to watch it :) but I do love Hayden Penetierre and the trailer's kinda crazy so it could be watched on a hilarious Saturday night ;)

Love, love the Scream films and I have been dying for more. These films plug directly into my twisted sense of humor and love for all things horror. I cannot wait until this opens and I will first in line to see it.

I seriously adore this franchise and I hope the sequel does well. I cannot wait to see all the survivors again on the big screen, and I really hope they make 5 & 6.

I didnt know there was a part 3 much less 4 and really, they may as well be the same movie for all of them; this trailer looks interchangeable for the first 2. Well if they casted me and changed the villan to a guy(me) who sneaks in at night and goes balls deep on all the female characters. Now thats a blockbuster franchise!

I am really looking forward to scream 4 but I hope Courtney Cox does not die as she is my fave in it. Sydneys character is great, but seriously how many times can she escape? I think she will either be the killer or be dead in this one.

nice blog, just subbed to it.

not just top blog editors but the stars and celebs will also be at HOLLYWOOD SPY'S ANNUAL AWARDS gala tomorrow :) Forget the Golden Globes, all the celebrities are hitting HOLLYWOOD SPY's glamorous headquarters this Sunday :)

ohhhhhhhh Dezzy please tell me Lady Ga Ga is there, I am wearing my Armani Tux!

MOONWALKER- Me also, I just wonder who at the original 3 if any will make it to the next 2 films.

MAJOR MACK- no.3 was ok but you didn't miss anything of a masterpice and was concidered the worse one of the three.

DARK BLUE JEANS- Agreed, I think the story needs to move away from Sydney a bit now, but in a decent way that honours her charcter, but Gale is one of the best for me so I do hope she doesn't.

Gaga, Justin (not the Bieber one), Beyonce, Enrique, One Republic, are just some of the names of the musical performers ... Gaga is premiering one of her songs from BORN THIS WAY ;)

well i'll be checking it out.. i feel somewhat obligated since i saw the first 3. i wouldn't call myself a diehard fan, but it's got neve campbell in it, so how can i not?

I really enjoyed SCREAM, so much so it was the first DVD boxset I bought (had to import it from the States back when DVDs cost about the same as a small car) so I'm really looking forward to this.

Also, DEZ AWARDS! Would they be called the Dezzies? hehe

I enjoyed the first Scream but the others were more of a yawn. I like that this one is set 10 years later.
Dezzy's awards are brilliant!

I guess this will give newbies a chance to go back and reflect on the older flicks. I think they are fun, but I have to be in the mood, for type of films! Silly Saturday or Sunday works for me~

Gale may have weathered her final storm!

I did enjoy the original Scream, but didn't see the other two. Im not much of a horror fan but I think I'd see this one!
See you at Dezz's!

Nice rundown of Scream 4. I was a fan of the original and will give this fourth installment a chance. I was not a fan of any of the other sequels but I have to say, I am intrigued by this one.

Scream 3 is far better than it
thanks

Thanks for sharing your thoughts on insurance coverage. Regards
Also visit my web page - wiki.underbonesphilippines.com

It's going to be end of mine day, however before end I am reading this impressive article to improve my experience.

We stumbled over here coming from a different web address and thought
I might as well check things out. I like what I see so i am just following you.
Look forward to going over your web page yet again.

Hey! Do you know if they make any plugins to assist with Search Engine Optimization?
I'm trying to get my blog to rank for some targeted keywords but I'm not seeing very good results.
If you know of any please share. Kudos!

Howdy this is somewhat of off topic but I was wondering if
blogs use WYSIWYG editors or if you have to manually code with HTML.

I'm starting a blog soon but have no coding knowledge so I wanted to get advice from someone with experience. Any help would be greatly appreciated!

Your method of telling the whole thing in
this post is in fact fastidious, every one be able to easily understand it, Thanks
a lot.

Hello! I've been following your site for a long time now and finally got the bravery to go ahead and give you a shout out from Austin Texas! Just wanted to mention keep up the good job!

It's very straightforward to find out any topic on net as compared to books, as I found this post at this site.

Take a look at my webpage - wikipedia.ufm.edu.gt

I like the valuable info you supply in your articles. I will bookmark your weblog and test again
here regularly. I'm quite sure I will be told lots of new stuff proper right here! Good luck for the next!

It's hard to find educated people about this topic, however, you seem like you know what you're talking about!
Thanks

Look into my web blog :: click the next document

As the admin of this web page is working, no uncertainty very rapidly it will be renowned, due to its quality contents.

Why viewers still use to read news papers
when in this technological world everything is existing on web?

Stop by my web blog ... vintage clothing stores in nashville