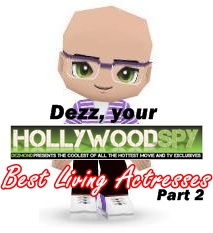 Dezmond, editor and chief of Hollywood Spy continues his list with part 2 of The Best Living Actresses. If you missed part 1 you can read it here, which included Cate Blanchett and Judi Dench. Who will make his list today?

Toni Collette is larger than life. We knew that from the first time we saw her in the cult Australian film MURIEL'S WEDDING in which she gave the most intelligent portrayal of a girl captured in the world which constantly puts her down. She was also absolutely flawless in LITTLE MISS SUNSHINE, THE SIXTH SENSE, EVENING, THE DEAD GIRL, IN HER SHOES, THE HOURS, but she amazed us mostly with her charismatic portrayal of a mother with multiple personalities in UNITED STATES OF TARA. The role is one those profound and multilayered ones which can be tackled only by the most talented of actors. Toni Collette did it so flawlessly and with such stunning ease that she basically made television history with it securing herself a spot among the best living actresses . 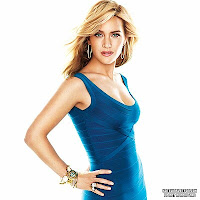 Kate Winslet is one of those actresses whom people love because they can relate to her. She has always been a woman comfortable with her body and her looks. She even became a role model for all the women who refuse to look anorexic just for the sake of being trendy and stylish. Although most average moviegoers know her best from TITANIC, she has a huge number of deeply profound dramatic roles in HEAVENLY CREATURES (one of Peter Jackson's first films), LITTLE CHILDREN, QUILLS. I personally loved her best as the greatest Ophelia ever in Kenneth Branagh's HAMLET, and as the tragic victim of the war chaos in THE READER. We will be watching her in CONTAGION, a huge action thriller on a worldwide disease, in Polanski's new drama GOD OF CARNAGE and in period TV series MILDRED PIERCE. 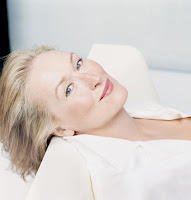 Meryl Streep is a category of her own. The unbeatable thespian, the actress whose talent and personality will never be outmatched by no other human creature.The list of films in which she gave outstanding, groundbreaking, mindblowing performances is way too long and she deserves an Oscar every time she appears on screen: JULIE AND JULIA, CRAMER VS CRAMER, DOUBT, OUT OF AFRICA, THE DEVIL WEARS PRADA, THE HOUSE OF THE SPIRITS, MAMMA MIA, PRIME, THE HOURS, ANGELS IN AMERICA, SILKWOOD, FALLING IN LOVE .... We will be seeing her in the future as Margaret Thatcher in THE IRON LADY.

British beauty Emily Blunt is the most starlicious young actress who is most likely to take over the throne of Hollywood in the future. Having Cate Blanchett, Meryl Streep and Nicole Kidman as her favourite actresses, Emily has also shown their elegant and profound acting talent combined with the refined, almost angelic looks and spellbinding charisma in her performances. You've seen her in DEVIL WEARS PRADA, THE YOUNG VICTORIA, THE WOLFMAN and you'll be seeing her in GULLIVER'S TRAVELS and GNOMEO AND JULIET. She is in love with John Krasinsky, and her best friend is Anne Hathaway. She's won a Golden Globe and was nominated for Oscars and Baftas.

This article was written by Dezmond, Editor and Chief of Hollywood Spy

Posted by Dempsey Sanders at 10:30 am

Enjoyed this list just as much as part 1 Dezz, glad to see Meryl making it and Toni Collette. And wow, how hot does Kate look in that pic!

Thanks again for guest posting, enjoyed the reads.

Emily Blunt!!!! I am so happy to see her in the list, she was great in DWP, good taste Dezz

Well Dezzy darling, Meryl is my obvious favourite, but Toni Collette is fabulous. I like all actresses in your list and in Part 1.

Demps - I am surprised you did not bitch and moan Sandy Bullock did not appear here!

I hoped that both Winslet and Streep would make the list. Both incredibly talented actresses :D

@Dempsey
glad you liked it, Dempsey ;) And off course, the post couldn't go without Meryl and Toni. They constantly blow me of my feet with their roles! And Kate with her looks :) And I've enjoyed the gig here at your place. Hope my $1,000 paycheck has been sent to me :PP

@DarkBlue
yep, the list couldn't go without our lovely Emsy :) I love both her and her husband.

@Chrissy
well, my dear, if you like both of my lists, it must mean one thing - you share my impeccable taste :PPP And I've explained the Sandra Bullock situation last time in comments :)

ha ha Dezz, yes its sent, though I wouldnt trust the british mail ;)

what mail? Didn't I tell you that I want my check personally delivered by Karl Urban? Or possibly Chrissy :)

ha ha deal, I'll send it with CJ, on the premise you keep him with you!

Another great list Dez. Glad to see Meryl Streep made it.

I'm in absolute agreement on these incredibly talented ladies, Dez. No matter the project, they shine on screen and put all that they are into the role.

@Masy
ah, it couldn't go without her majesty Meryl ;)

@Melissa
they are the greatest of all the actresses!

Kate!! She was wicked in Heavenly Creatures. And she is not fat, world - she's shapely. (In other words, sexy!)

You were not kidding. Meryl Streep is front and center.

@Alex
I didn't know you watched HEAVENLY CREATURES, it still is one of my favourite films.

@Major
indeed she is!

@MDV
Of course, I never joke when it comes to Meryl :)

Hi Dezz!
I love all your choices! Are you continuing with a part 3? Because I'm surprised you didn't mention Helen Mirren. She is absolutely mesmerizing in any role she takes, from serious drama to hilarious comedy! I first noticed her in "The Madness of King George" and though her roles wasn't huge, she practically stole the movie!
As "The Queen" she was completely believable, and in the "The Last Station" she gave a superb and Oscarworthy performance as the tormented wife of Leo Tolstoy.
My favourite actress however is Rene Zellweiger, who is as talented in drama as she is in comedy and can sing and dance with the best of them! My husband has a crush on her, especially in the role of Bridget Jones (with the extra pounds!) How she can gain and lose weight for her roles really shows her dedication for her art, even though it worries me for her health! :)

Kate Winslet is one of my favourite actresses, and yes, I like that she is comfortable with her body image without having to become so thin you can see bones.

@Phylly
part III wasn't planed. But who knows what might happen if the public pressures Dempsey :) I do love Helen, and she is amazing in every role she does, she's just not in my top ten list, probably because her movies often don't fit into my favourite genre. I loved her in QUEEN, she was breathtaking, and so believable, and I think she basically built a monument to Queen Elisabeth II with that role.

@Lyndylove
that's why we all respect her so much!

Dezz,
I agreed with all your picks! Great list and great taste you have ;-D

Really great picks! Though, I don't know the last one - don't remember her from The Devil Wears Prada, but it's been a while and I didn't care all that much for the movie...

@Vics
she was before, but now that she got Emmies and Globes for her performance in TARA, she is starting to get bigger roles as well.

@Tara
thanks, Tara, Emily played the naughty assistant to Meryl Streep in DWP, the one who becomes good in the end :)

kate has really gotten more n more beautiful since titanic. i wouldn't have known her otherwise! had been looking out for the movies ever since, but here we seemed to have a limited access to it.

@Levian
there are always Torrents, Levian :) they offer full access to beloved Kate :)

@Vigrx
Dempsey, I hope we're getting some free viagra from these people :)

The only actress I am not so familiar with is Toni Collette. Now that you remind me, I did see her in Little Miss Sunshine. Everyone in that movie was so good, I guess I didn't focus on her performance. I will have to try and watch her in some other films! :)