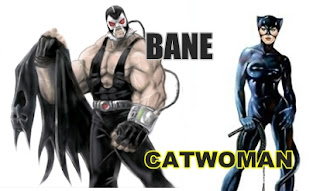 Today Christopher Nolan reveals two major announcements on the upcoming Dark Knight Rises set to be released in July 2012. After months of speculation weather Anne Hathaway will join the cast of the new film, today’s announcement reveals that she has indeed signed for the role of Selina Kyle, who’s alter ego is non other than Catwomen, a role made famous by Michelle Pfeiffer in Batman Returns (1992). Tom Hardy’s character has also finally been revealed, he will play Bane one of Batman’s most formidable rogues best know for breaking Batman’s back in the comics.

The news comes quickly after all the Marvel announcements in the last week or so, Spider-man, Captain America and the Thor movies have all released set pictures of the lead roles in their superhero outfits, it could have been almost predictable that the forces behind this DC superhero would have to announce something quite soon, and now Batman fans prayers have been answered.
Catwoman was one of the most popular villains fans wanted to see return in Nolan’s vision, and if the character does follow similar to Tim Burtons Batman Returns, could also be a new love interest for Bruce Wayne.
Anne Hathaway (Devil Wears Prada, Love and Other Drugs), now donning the tight black vinyl and whip is said to be ecstatic with excitement, and fans everywhere seem to be more than happy with the news.

But if the news wasn’t a big enough announcement on Hathaway, Tom Hardy’s role which for a long time was speculated to be Dr Hugo Strange, finally gets confirmed as playing Bane.
The character of Bane was last seen in the disastrous Batman and Robin (1997), which saw him being portrayed as a big brut with no brains, rather than the comics depicting him as quite a clever formidable adversary of the Dark Knight, even responsible for braking Batman’s back.

The Dark Knight Rises, released July 20th 2012 will be Christopher Nolan’s final Batman story, and what a story it’s shaping up to be. More announcements and further characters are due to be confirmed very soon, and speculation points to the fact that Catwoman and Bane will not be the only villains we see in the upcoming feature.

What do you think about the new villains? Are you happy with Anne Hathaway being cast as Catwoman?
Leave your comments below!
Posted by Christian James at 7:43 pm

Batman is the only DC character I've ever really liked.

Cool announcements! Anne Hathaway is gorgeous and she will definitely keep my attention high rocking that tight black outfit. And I can easily picture Tom Hardy as the physically potent Bane. I cannot wait to see what Nolan does with his final Batman rendition!

I’m guessing Anne will play the Queen Mother soon the way she started getting roles in all possible movies for reasons unknown … not that she’s not cute, but I’m afraid she’ll pop out of my fridge when I open it in the morning …
Love Tom Hardy … and love posting his naughty pics at my site :) which my readers love too :)

Anne wouldn't have been my first choice as catwoman, but I suppose she might do a good job.

Anne is definitely not Catwoman material. She's too wholesome and nerdy. She's a good actress, so maybe she can fake it, but I just don't know. I mean Get Smart, Ella Enchanted, Devil Wears Prada, Princess Diaries... not exactly a sexy resume.

It's going to be very tough topping the Joker. I like Tom Hardy and I have very faith that he will be awesome as Bane.

Hathaway wouldn't be my first choice either, but with Nolan directing, I'm sure it will work. Doesn't surprise me this will be his last time at the helm though.

Who knows, she might do a good job as catwoman

final batman movie? aw, meaning we will have to wait many more years before some other director decide to remake the whole sequel again. n Anne Hathaway as Catwomen! that would be something worth looking forward to. she impressed me with her slightly freakish character in Alice Wonderland. making me loving her for it. i'm sure she has many more potential in her to continue surprising us!

I think she'll make a good catwoman. I haven't really seen much of her work because of the genres she tends to lean towards, but I imagine she'd look good in the suit!

i was looking forward to the riddler as a villain.. slightly disappointed. bane should be good though. not so sure about catwoman.

I glad to see it's Bane. I think Anne H will do okay.

Can't wait for these movies! ;D

Wanted to find out how Dempsey was doing!
And wasn't sure if you were aware The Movie 411 was signed up for my music blogfest tomorrow, as Dempsey was probably the one who signed up a few weeks ago.

Anne Hathaway? Really? Hmm. Seems an odd choice; should be interesting to see how it plays out.

the truth has boots? said...

This is annoying. Anne Hathaway is just another actress who made it big by first coming out as this sweet and innocent wholesome girl who everyone loved because they were tired of the bad-ass sex-symbol kind. And just like so many other famous celebrities (Britney Spears, Christina Aguilera, Keira Knightley,Lindsey Lohan, Rihanna) they accumulate their good-girl fame and then BAM all of a sudden they're wearing almost nothing and playing the sultry bad girl in movies. Since when is Anne popping out boobs in movies and looking all goth? Come on girl. Stay true to you now, no need to prove the world you're just as good as Jessica Alba. If you're a Kate Hudson, stay in Kate Hudson-like movies.