127 Hours: A Gripping Masterpiece of Filmmaking

Danny Boyle is back with 127 hours which previews in UK cinemas today before its official release on the 7th January. The feature length movie follows the true story of a mountain climbers remarkable will to survive after a boulder crashes down on his arm and pins him in a canyon in Utah.

The feature length movie follows Aron Ralston’s remarkable true story to save himself after a fallen boulder crashes down on his arm and pins him in an isolated canyon in Utah. Over the next five days (127 hours), Ralston (Acted by James Franco), examines his life as he fights for survival to finally discover he has the courage and the wherewithal to extricate himself by any means necessary. 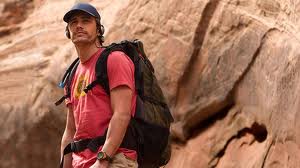 For me, Danny Boyle delivers his finest movie yet, though more credit would go to James Franco’s amazing performance as Aron Ralston.

A well paced movie that grips you at every turn, this feature relives Ralston’s extraordinary journey as he scales a 65 foot wall, hikes over 8 miles, recalls friends, lovers and family, and also two hikers he met not long before his accident.
Though the events unfold in gruelling detail, cutting your own arm off with a blunt knife and drinking your own urine being some of them, Boyle successfully doesn’t turn it into a horror movie outing and rather making it a gripping, eye wincing drama full of hope and courage.

Franco’s performance shows great versatility, showcasing just how much he must of delved into the personality and mind of mountaineer Aron Ralston, making this feature the truest recollection of true life stories with every bit of intensity you would expect.
127 hours is also nominated for three Golden Globes including Best Performance by an actor - James Franco, and Best Screenplay - Danny Boyle and Simon Beaufoy.

Overall, the horrifying true events of 127 hours is packed into less than two hours of gripping must watch viewing. Danny Boyle delivers a masterpiece in filmmaking and James Franco’s portrayal is just as inspirational as the movie itself.

Worth a cinema outing, go see it!
Posted by Dempsey Sanders at 12:57 pm

Unfortunately, "127 Hours" wasn't screened theatrically in my country, so I still haven't seen it. Can't wait for it to leak online.

Dempsey, do you think the film will bring some awards to Franco? Especially with the current buzz around him?

@ Nebular, thank you, can't believe they have not screened this in your country yet.

@Dezmond I personally think it will though I never speculate on awards, but his performance for me was oscar winning.
And he is nominated for a golden globe for best performance by an actor in a motion picture.
Hmmmm actually that should probably go in the review, why not! Thanks for your comment Dezz

Two things will keep me from seeing this: James Franco and the subject matter.

Thanks for the review :) Though I'm disappointed that the running time isn't 127 minutes, I really can't wait for this movie!

nice review..i love to watch this kind of movie..

This film is seriously in my top 10 best of western cinema of 2010. Haven't managed to publish the full review yet but I try to bring it up ASAP.

watched this today and agree with everything you wrote. I will be back to read more from you Demsey.

Ohhhhh I really want to see this now. Another great review Dempsey, your blog gets better and better.

Seen this and loved it. Great review Demps