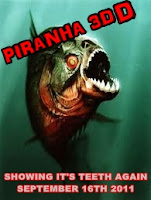 Piranha 3D, a remake of the 1978’s original and a surprise summer blockbuster hit about Prehistoric piranhas devouring unsuspecting holiday makers in Lake Victoria is now had a sequel green lighted. It's been given a release date of September 16th 2011, just a mere 13 months after its predecessor.

Although early stages and not much is yet known, a release date is already set for September 16th 2011, Dimension Films rushing it’s sequel for another theatrical release. It will be directed by Feast’s John Gulager, who is writing the screen play with long-time collaborators Patrick Melton and Marcus Dunstan.

Early rumours suggest that production is being rushed to start early winter and it will have more “tit’s, blood and sharp teeth” than the first 3D outing.

Also the title is going with Piranha 3DD (double D have anything to do with more boobs we wonder?), and will follow a new set of characters in a different location rather than the same lake.

Other rumours suggest that like the first, will have a cameo appearance, and rather than Richard Dreyfuss this time, although still following another cinematic big fish that had it’s own 3D outing, Dennis Quaid may be the one to look out for.
The only credited cast member as of yet, and according to the IMDb website is Neil Hopkins, best known for his role as Liam in the Lost series.

Piranha 3D had mixed reactions among critics, however many all agreed that it was their guilty pleasure of the 2010’s summer blockbusters, a movie which never tried to take itself seriously and intended to be all out gore fun. Will it’s sequel up the ante and be just as popular? Next year we are sure to find out.

What are your feelings about the sequel?, Leave your comments below.
Posted by Dempsey Sanders at 5:00 pm

those nasty little fish are really resistant. And the original film is as old as I am :)

I LOVED Piranha 3D, so I'm all about a sequel. I guess this one will feature the big mamma and papa piranha from the end of the remake?

I hated Feast, though, so I'm not sure about that Gulager guy as the director.

I loved Piranha 3D. It was so campy, fun and a total treat. I love laughing through the gore. I sincerely hope they change their minds about more boobs. I can't stand looking at topless women. Now if they were to say add some fine naked male pecs and ass, I'm all for it.

Loved the first (remake). But can't stand Gulager. I guess we shall wait and see...

Piranha 3D was a great campy fun. I loved it, so I'm excited about the sequel.

@ TheGirlWhoLovesHorror
I liked it too for what it was, so a sequel could be just as entertaining I agree.

@ Malice
Can't say I have a love for Gulager either, not a fan.

@ Jaccstev
I agree with you, it is strange, but then again Dimension Films do spit out sequels and likes to drain a franchise for all it's worth, SP is a different class of film that takes time and money and a decent script like the first.

@ Nebular
Me too George, hope it is just as fun.

i haven't catch the 3D sequel yet n they are coming out with a third! should i assume that the 3D version was good? or was it only the first?

Well Levian my dear, the 3D sequel that came out this year actually wasn't a sequel but a remake. Which was good in a guilty pleasure kind of way. The sequel to that remake (subject of this post) is out September 16th 2011. So there is no third outing yet, unless you mean the original that came out in the late 70's :)