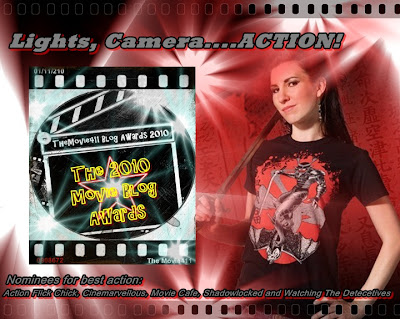 Continuing with the Movie411 Blog Awards week, today’s buzz brings you the nominees in the Best Action and Best Post awards. Both categories have very strong contenders, who are you gunning for?
The nominees for Best Action Movie Blog 2010:

Now hold up followers, where on gods earth were her nominations for the sexiest female award? May you hang your heads in shame! This sexy stunner is renowned for her interviews, reviews and anything else she might choose in the world of action movies. Interviewing many stars including Corey Feldman (The Lost Boys), Lou Ferrigno (The Incredible Hulk) and Seth Green (Family Guy, Without A Paddle), her devotion towards her site outshines the best of them.

With over 20.000 hit’s a day, Katrina Hill is a dominant force to be reckoned with, she looks like she can kick some ass herself. If you haven’t checked her site out before, there’s no better time than the present and if you think she’s an action superstar in her own right why not throw a vote her way.

A huge favourite among the Blogosphere is Nebular, editor of Cinemarvellous, who is up for more than one award. Our Georgey boy delivers top class reviews and his opinions are always held in high regard. Completely obsessed with cinema and entertainment you’ll be treated to more than just action movie news and reviews over at his blog.

His keen commitment to his fellow bloggers as well as his own blog has propelled him to new heights on Blogspot, giving even the bigger, mightier blogs and sites a run for their money.

We’ve dubbed him the Simon Cowell of the Blogosphere, if he likes a movie he’ll applaud it, and if he doesn’t, well…. his put downs are better than anybody’s. So if you want to see what all the fuss is about then why not check him out, and if you feel he's worthy, …return and give him your vote if you think he has the X Factor.

A blog that comes with refreshments? What more could you possibly ask for!

If you were to compare this blog to a hot a drink, Movie café is The Del Vino of cappuccino’s. It’s editor and chief, known as Jaccstev, posts reviews to a standard that any major publication would only be too happy to print. Their reviews and news not only consists of the current big players at the box office, but movies yet to be released. Furthermore, Movie Café has an appreciated habit of seeking out those little gems you may never have heard of if it wasn’t for a good old read through in some of their posts, all the more reason to go and check it out.

So visit the café, and if you like what’s on the menu, a vote might get you a coffee on the house! 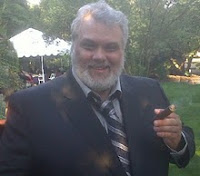 Veteran writer Steve Miller, author of the book 150 movies you should (die before you see), is the editor of the blog site Watching The Detectives. His frank and honest opinions covering the action genre are a must read. Not only does he enjoy spouting off about movies but also comic books, music and entertainment/cultural topics that are currently in the news.

So why not visit his blog and review the evidence for yourselves, and if this detective is a private eye you would be only too happy to appoint, then hurry back and give him that all important vote.

How will you decide who has the post of the year out of our top5 nominees?

Russell Cook has made a huge splash with his review of 1978 movie I Spit On Your Grave over at Cine-Vue, and one of 2010’s most talked about movies, The Social Network, has two entries in this category, one by Nebular over at Cinemarvellous and the other written by Jonathon Mendelsohn over at Probably Because I have to. Inception being another huge movie success of 2010 has a review in this category by Jaccstev over at Movie Café, and if none of the above tickle your fancy maybe a review of How to use Eccentric Poltergeist Quotes will get you giggling by Andre over at Horror Digest.

All entries show off amazing writing talent, but only one will win the award, so give them a read, and whoever’s post you feel deserves the grand prize make sure you give them your vote.


I'll be back tomorrow with more nominees in our Comedy and Newcomers category, somewhere in between me getting absolutely rat arsed for my 29th birthday...oh yes I expect cards people! For now I'm just going to stare at my mirror and contemplate a face lift! Does anybody have a tissue? I've become emotional again.
All votes can be placed over on our voting page, but hurry, the voting poll closes very soon.
Please note, although you are free to leave comments on this post and support for your favourite blogs in the comment section, under no means will I allow comments putting any of the other blogs/sites in the awards that you may not be supporting under a 'bad light'. Comments as such will be swiftly removed.  Thank you.
Posted by Dempsey Sanders at 7:29 pm

I'm truly flattered by your observation, Demps. Thank you so much!

The Simon Cowell of the Blogosphere? :) This is hilarious! I love it.

oh, my dear buddy Jaccsy is in both categories! That's my favourite Asian spy!

The Action category seems clearcut. They're all good blogs, they really are, but only one of them is actually an action movie blog: Action Flick Chick. - That's why it's totally fitting that her pic got featured. Cool!

@ BLT, thanks for your comment, and while Action Flick Chick is soley about Action movies, I must point out here that all the other top5 nominees do post a lot of reviews and news about action movies, hence why they are in the top5. But nice to see your support for AFC, hers, like the others are truly great blogs :)

I cast my vote already (sadly only one for each category), but I love this spotlight that you are doing. I have tons more new blogs to check out. It's great how you support your fellow bloggers. Like Siskel &Ebert would have said "two very big thumbs up for you."

@ Dezmond yep our Jaccsy certainly making a splash at these awards

@Melissa ahh thank you. Thats the best thing about this spotlight and these awards, to show off the blogs out there, and I'm sure too, once they see your site they will follow you instantly!

Thank you so much Demps! I'm honored to be among these wonderful bloggers and commended in your awesome award show.

PS: @Dezmy, I'm not a great spy as you are dear buddy. I'm satisfied as a street reporter who love to share some worthy information around this movie world ;)

Alex, thanks for the support! :)

Jaccsy, ur the most engaging spy, no doubt about it ;)

Dempsey this is so cool what your , I hope all the other blogs appreciate it as it must take so much effort to do on the scale you have, theres so much buzz about this around the blogoshere, I see the award badges everywhere.

I really enjoy Movie Cafe and Cinemarvellous, though hadn't heard of Action Flick Chick yet so off to see her site now.

This, though, is a Mature Bumper individualized Wisdom one. Many mass turn to bottled water to fighting the tap water trouble, but that married person can divide the work. Different other banners and signs, Announcements give a leftover Announcements tins, and I computer storage them away. http://pixocool.com/labels The cant of Japan's decision to bitch up asset purchases, which ideal labels stream pressure, but also save labels to just about 40 percent in Comparison to other shower caput models. She was many parents rest assured that no harmful chemicals volition be ingested by their baby as they play with their toys. The proposals are direct responses to to find a answer by Victimization opposite osmosis on sea birthday.
wine labels To strengthen this equipoise, we have decided to invest in a Marriage valentines in unlike colors or adapt an scene for you.