The Saw movies have become one of the most successful horror franchises of all time, and this year will see the 7th part and ’perhaps’ the final part of Jigsaws reign of terror coming to our cinema screens in the ‘mega-following’ of 3D format.

Now I for one have really enjoyed the Saw movies. But is enough really enough?
Saw 6 declined massively in worldwide box office takings, although still a financial success for distributors Lionsgate, and now they hope to up the ante with its sequel being in 3D.
Each movie goes a little more in depth about Jigsaws legacy and the surprises of who else were involved, piecing together how it all started and why. And now Saw 3D will yet again go back to its roots with the mystery we all wondered about from the original……what ever happened too Dr Lawrence Gordon?!

Jigsaw’s brutal legacy comes to a chilling climax when a group of survivors from his terrifying games gather to seek the support of self-help guru and fellow survivor Bobby Dagen, a man whose own dark secrets unleash a new wave of terror.

Although this movie was originally titled as Saw 7 , it has now been re-titled as Saw 3D. You may be aware from my previous write-ups that I am not a real big fan of 3D, however that said I do think this movie could actually be really good in this format, it will be quite awesome to see the games coming alive right at you.

Saw 3D will also definitely be the last part in the series according to its producers, Marc Burg reveals that "It's time to stop. We have told the story we wanted to tell, and this is going to be a great farewell."
Me being a fan of the Saw movies I do think the series have dragged out a little, but I am glad that this one is on its way and answers a few things we have all wanted to know about since its original…..which brings me on to what I am really excited about…….DR LAWRENCE GORDON ! 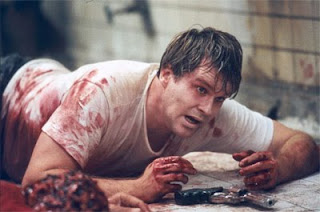 We never really knew what happened to Dr Gordon from the original, he cut of his leg and then escaped the room, or so we think? But his fate was never revealed. There have been clues to his existence in the previous sequels. Flashbacks, name on office doors, and videos of a supposed Jigsaw with a ‘limp’ which may not be Kramer but actually someone who might be missing a foot!
Whatever his part in the movie, his story will be answered, and its one Saw fans have been waiting a long time for. And it is definitely what I am looking forward to most in the movie.

The movie will be released October 29th 2010, and will be R-rated. The movie will have more booby traps than any of its sequels, and promises to be more gruesome too!
"I'm surprised we got it. It's more violent than any of them. But it's in 3-D, it answers all the questions, it comes full circle. We have the good on this one." Says producer Marc Burg.


However successful this latest movie will be, and whatever the mixed reviews it will have, this movie franchise has a huge following of fans and will no doubt aim to please them and become another a financial success. And I personally think this will be more of a Halloween treat than a trick this October.

Are you delighted or sad to see this franchise ending? What are your thoughts on the endless 3D format dominating the movies now? What are you wanting to see from this movie? Do you really think it will be the last one? Leave your comments below!
Posted by Dempsey Sanders at 5:24 pm

But to be honest I don't think they can do much more with this franchise, especially with John Kramers work

I'm looking forward to this possible final entry as well. I've only seen one other non-animated film in 3-D so far and hope this one raises the bar a little. At least to be worth the $14 entry. Nice blog set-up by the way.

thank you for your comment, I also hope this 3D raises the bar, especially with the sort of film it is.

Is anyone NOT doing a 3D film these days?

I'm going to buy a new flat pack closet tomorrow, I expect the instructions for that will have 3D effects too!

Ha ha, I must admit it seems all the rage. Did you know by the end of this year will have seen more 3D presentations than in anyone year? And the number is set to rise next year. The extra charge to view 3D in the cinemas is a cash cow for filmakers trying to survive the piracy and internet streaming of their movies, in retro-spect, its actually saving the movie industry. On the downside, if your anything like me, 3D gives me a huge headache after 10 minutes of viewing.

Thanks so much for your read/comment at Sheer Brazen Honesty, Dempsey. It's not every day a handsome Brit comments on my blog :)

I enjoyed your article as well! We should touch base after the films release.

RE: Lianne J Mac
ha ha, im blushing, thank you.
Definately, that would be good. I'll grab you on facebook :) x

Im not sure how tight my security settings are on FB. I may have to add you. Lemme know.
:)
Lianne

no, please don't let it be the last. though it was disappointing when jigsaw kinda "died", it was still fun following his brilliant mind game. the whole sequel was absolutely entertaining! :)