9/11 A day that we all will never forget….World Trade Centre and United 93 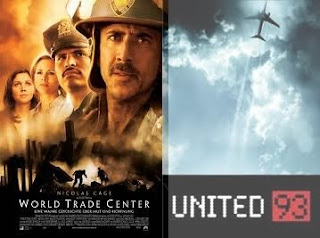 I found it fitting that today’s movie blog should be about the tragic events that happened 9 years ago today!
Like many of you, we will all remember the unbelievable and harrowing events of 9/11, most of us remembering exactly where we was when we heard the news and what we were doing at the time, and more importantly our thoughts will be with the people that lost their lives and the families and friends who suffer with the memory of today’s significance.
I blog today about two movies that I feel tells the story of that fateful day which also honers the memory of all involved, The World Trade Centre and United 93
The World Trade Centre (2006)

The movie focuses on minutes after the planes hit the towers and when the building collapses over the rescue team from the Port Authority Police Department. Will Jimeno and his sergeant John McLoughlin are trapped under the wreckage while the rescue teams fight to find and save them.

This movie focuses on the flight that didn’t make its target, believed to be the White House (never confirmed) and the passengers that heroically tried to take back control of the plane. The movie, set in real time and tells us of how the passengers learned of the attacks on the towers and the Pentagon, and their decision to do anything they can to overcome the hijackers of flight 93, and their conversations with their families by phone.

I would find it inappropriate to rate these movies or to say which one was the better. What I can say is that these movies never exploit the tragic events, and remain honourable throughout the films contexts.

Director Oliver Stone remains respectful in directing the World Trade Centre as do the cast in portraying the characters involved, equally as the director (Paul Greengrass) and cast in United 93.

Both films become a memorial for the audience allowing us to share, remember and honor the brave events and the hope that survived when so many didn’t on a day that will live on in our memories forever.

They are both emotionally gripping for more than two hours each with very different stories of resolve and strength, in truly strong storytelling fashion, and I personally respect the filmmakers willingness to let these voices that drive both these movies to be heard.

What was you doing that day? Where were you when you first heard of the events unfolding? Have you seen these movies and what do you think? Respectful or exploitation? Leave your comments below!
Posted by Dempsey Sanders at 7:14 pm

I remember seeing it on TV and seeing the newspaper.

i remember being at work watching the TV, and thinking it was a movie that I had never seen, and then the mass of phone calls coming in

I remember my teacher putting it on in class and we all sat there in complete shock. When I told my mum she didn't believe me until she actually saw it herself.

A lot of innocent people lost their lives that day, and have since then!

I remember waking up to my mom and cousin crying, watching TV and how I felt so vulnerable and unsafe.

I wana Link exchange with you. Also i can publish your post

re:Profile Facts
Thanks for your comment/request.
I'm not exactletly sure what you mean, but certainly happy to exchange links with you

I enjoyed both films and they are good recommendations. I was at work a few blocks from the Sears Tower and I remember that they closed our building and sent us all home, running extra trains on the Metra and CTA. It was so quiet downtown in the Loop, people were subdued and terrified, just walking and not saying a word. Even the traffic was quiet. Eerie. I got off my bus at an early stop and walked to my parents house to sit with them.

Wow Melissa, thanks for sharing that with us, I could only imagine being that close and the fear and earieness that people must have been feeling. I would of certainly wanted to be with my family too. Thanks again for sharing x

I watched World Trade Center, but I've never seen United 93. It was good to see Michael Peña. I also think it's good that they don't try to exploit the events.

I've seen United 93 but I forgot all about World Trade Centre! I must watch it - I believe it is very good.

I had seen World Trade Center before. Great movies. 9/11 is something that everyone in this owrld will remember. especially if you had seen the real videos.