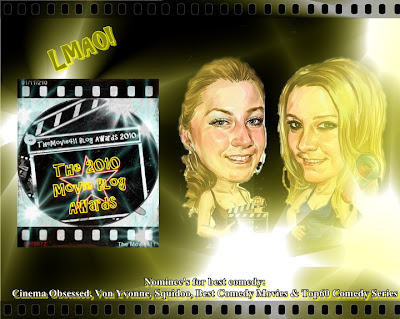 Part Two of today’s award buzz brings you the categories of Best Comedy and Best Design with all their nominees.

Your Nominees for Best Comedy Movie Blog 2010 are:

Up for a total 3 awards, the award of best comedy might be their most fitting category. Angie and Chantale, editors of Cinema Obsessed continually write their posts with the most witty and enjoyable humour that one can’t help but giggle and smile all the way through their posts. Not only posting reviews on many comedy movies but making their posts as funny and entertaining as possible. And if that is not enough to make you grin like a Cheshire cat, their fabulous art work certainly will, putting themselves in many top movie posters, pure genius.
Are they your funniest blog? Give them your vote if you think so.

One of our favourites in the sexiest female award is Von Yvonne. She’s made it into the best comedy category for her funny remarks when reviewing and posting anything she wants to discuss including movies. Could she be a surprise win in this category? Have a read of some of her votes and see if she’s worthy of your vote in the comedy award.

Though author unknown, the title of the blog may just give away why it has received so many nominations for best comedy.

Mostly discussing the comedy genre and reviewing some of the most funniest movies, the editor also puts on polls to what the readers thinks are their all time favourites. Got to be worth a read. Will the Best Comedy Movies Blog grab your vote?

Controversy alert guys, this is supposed to be for the Best Comedy ‘Movie’ Blog not series. Well it did receive the top5 nominations and its you the readers who nominated, so ‘Mr Movie’ well done. However will it take the comedy movie award blog prize? There’s sure to be handbags at the ready if it does but what’s an award show without a little bit of controversy, and if the Top60 Comedy series gets your vote, well it will probably be a Wagner form X Factor moment.
Who knows what will happen?

Will you agree with their picks? If you do then maybe they will nab your vote, so have a look, the decision is yours!

A blog design is important these days. With the vast amount of movie blogs out there, a well designed site could attract more readers, and if your blog/site is easy to navigate you will have more chance of readers returning. The nominees in this category have all unique designs, but who’s is most pleasing on the eye?

Buzzing with bee’s we have Nick Meece nominated for his blog design at Sequel Buzz, Dezmond over at Hollywood Spy with his funky animated self complimenting his design, Cine-Vue’s Daniel Green is responsible for sporting a modern cinema feel to their blog, Jaccstev’s forever updating Movie Café with the latest movies on their menu professionally put into the design, and last but not least we have Minoccio over at Minoccio Movie Blog sporting the more classic of design themes.

All blogs having a good eye for detail in their designs but who’s design do you feel should walk away with the award?

All votes, including votes for best comedy and best design can be placed on our voting page.


Tomorrow comes the final Buzz before the winners are announced this Thursday. We will be looking at the nominees in the Best Horror Award, and also the big one, The Gold Award 2010 and its nominees.
Posted by Dempsey Sanders at 12:34 am

Go Dezz!
You notice I get to say that a lot?

@ Alex, ha ha I know, but its great to see your support for a pal, so why not huh? And it's nice to see then supporting you too my friend.

Don't know who the winners will be, but these are all outstanding and I wish every one of them success.

Awesome!!! Thanks so much for putting this up!!

I think Alex should continue saying that a lot :)

Go Angie and Chantale, you are the funniest people I have ever read, hope you get it, though good look to the others too.

DBJ - you're officially my favourite person.

Looking for the Ultimate Dating Site? Join to find your perfect date.