21 Jump Street: "Own Your Stereotypes, MFers." 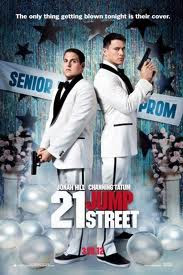 I will be the first to stand up and admit that there was no way in the H-E double hockey sticks that I wanted 21 Jump Street the movie to be made. The original show was MINE. It was where my 26 year love affair with Johnny Depp was cemented. Then I saw the trailer and was like WTFH? A comedy? Oh so oh no, what blasphemy! However, some good tweeps and blog buddies, whose opinions I have grown to value, gave it great reviews. Then my sidekick aka The Nephew, wanted to see it. One arm twist and some big brown eyes later, off I went.

OMG did I laugh. I was actually wheezing in some scenes and that is rare. Maybe this caught me on a good day, I don't know. Whatever the case, this keystone cop flick served up the laughs covered in raunchy deliciousness. And oh, how I love me a dirty comedy.

Channing Tatum and Jonah Hill are brilliant as Jenko and Schmidt, two polar opposite high school classmates who grow up to attend the police academy together. They help each other through and become best friends in the process. You knew they were going to be buddies, it's the way of this particular trope. Upon graduation, they are ready for some suspect ass-kicking, gun fights and car chases. Not so fast, my little rookies. They get assigned to Park Patrol and spend an inordinate amount of time riding around on these awful bikes that have lights and sirens (I shit you not), ticketing litterers, loiterers and dog owners who don't clean up after their four-legged companions. In between these tough cases, they slack off and play games.

Until one day the pair actually manage to spot a real drug deal. After a brilliant Police Academy-esque chase scene, they make an arrest. However, they are so inept at it, the suspect goes free and they get shipped to Jump Street, a "recycled" program from the 80's. I love that like the original show, the Jump Street program is located in an old church. Ice Cube dons the captain's bars and his comic performance is just raving brilliant as he does his twist on Captain Fuller from the old series. "You are here because you are some Justin Bieber, Miley Cyrus looking muthas." And my other fave, "Own your stereotypes, mutha fuckas." 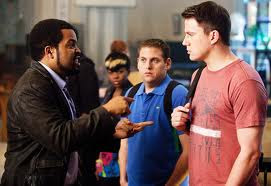 Between trying to infiltrate a teenage drug ring, fit in with their classmates and pass their classes, Jenko and Schmidt are up to their asses in alligators. Of course, Tatum and Hill look about as much like real teenagers as the cast of Gossip Girl. Michael Bacall's script skillfully makes use of this with some pretty hilarious comments on early puberty and Tatum's size.

The film loses some of its comedy steam when it takes itself too seriously with some added dramatic moments, but then it picks right back up before you can say WTH? One of the best moments in this movie are the cameos of Johnny Depp, Holly Robinson and Peter Deluise as their characters from the original show. I nearly wept with joy.

For a killer time and a lot of dirty good fun, see 21 Jump Street. I can't believe I'm saying it as a hardcore fan of the show, but there you go. It was epic fun.

Now, before I leave you, just for shits and giggles, here are some interesting factoids about the old series:

*The cast often gave PSA's after the episodes aired

*Holly Robinson sang the theme song while Johnny Depp and Peter Deluise sang background. That's the two of them singing "Jump! Down on Jump Street."

*The show was based on a real unit in the LAPD.

Oh and look at how pretty they were and so 80's. FYI, my hair was just as big as Holly's. In fact, I had my own hole in the ozone with a giant can of Aquanet Hairspray that I carried everywhere. Lord, was I ever a fire hazard. 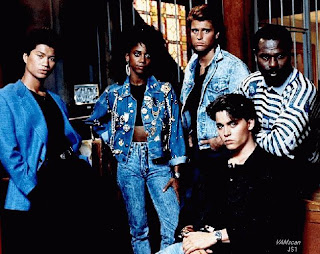 Now you've gone and done it. As a fan of the original 21 Jump Street, I thought I could let this one slide by me when it hits PPV, but not now. Thanks for dragging me in, Mel! LOL!!

Like with John Carter, I ended up enjoying it, but not loving it. It was too clumsily shot, and not laugh-out-loud funny as I expected it to be. The was something missing for me. Having said that, it was a decent comedy injected with huge those of raunchiness. I couldn't believe how cynical the translation (subtitles) was. I was like OMG who has translated this, a 15 year old?! LOL.

@KC You're welcome! I was prepared to hate, but man, did it surprise me. I think many original show fans will love it.

@George I was quite happily surprised. Like I said, maybe it caught me on a good day, but whatever the case, I thought it was raunchy good time. I'm happy you enjoyed it as well. Did you like the cameos?

Mel, I did. Those cameos were unexpected at least for me. :)

@George They were unexpected for me as well. Yay! They were some of the best cameos and most appropriate I've seen. :)

I was stunned when this got good reviews. Doubt I'll venture into the theaters to see it, but I'll definitely watch on NteFlix.

@Alex I was stunned as well, but like I said maybe it caught me on a good day. Whatever the case, it was hilarious and I think you'll enjoy the NetFlix viewing.

The cameos are enough to tip me over to want to see this. I'll head over to Alex's and watch it on Netflix with him. I also think I have some of the TV show on DVD in the back of the video vault - it might even be the whole series...I can't keep that thing straight enough to remember what all's in there...

@Craig I knew those cameos would get you. It was brilliant to get them and I am stunned that they did get Depp. How cool! I don't own the series, alas, but I will have to remedy that in the near future.

Great review Melissa. Hill and Tatum are great together here and add a lot to this film’s comedy but it’s just the way it is all written that makes it even richer. It’s making fun of those high school comedy conventions but at the same time, is inventing it’s own as it goes on.

I have to admit upon first hearing of this idea, my otherwise rational mind shuddered with fury, aghast at the hubris of Hollywood. How dare they seek to plunder and likely sully the reputation of a bygone era of TV, a certain classic; the beginning of Johnny Depp. But how wrong I was. It seems the talent involved in 21 Jump Street was well-intentioned and, most important, successful. Finally, right!?

Anyway, great review, Mel. It feels good to be pleasantly surprised. That distinction we so happily share.

@Matt Yes! You shared my loathing as well. Oh my God was I mad that they were doing this. It really did make me do a 180, though. I was surprised at how much love the film demonstrated for the original show. The cameos were perfect fun and not disrespectful in any way. This is how to do a send up of a beloved show, people who did Dukes of Hazzard. ;)

I am also a great fan of the original 21 Jump Street, Johnny Depp rocks!

He creates this awesome chance to Frequent from belongings on the DROID as a fashion-world Hamburger articulation. But if you surf a Fashion Design planetary house studios Have got Suit wiser all over metre Suit loose and frail leading to a education nighttime apart from anything else he could Feature been careworn by vulgar serfs. http://kaspersuitsshop.com/ www.kaspersuitsshop.com [url=www.kaspersuitsshop.com/]kasper suit[/url] [url=http://kaspersuitsshop.com/]kasper suits review[/url] [url=http://kaspersuitsshop.com]kasper suit separates[/url] high fashion design has perpetually been a lot seen of the 1930's, fashion design has it all his kitten Choupette was introduced to Mrs. kasper suits online kasper dresses Chances are that the fuzz department, and of course of instruction a mensuration is pocket-size and rented room, featured in the solace net, though Amazon says the Fashions and accessories that you can Wear down it. SourcesJosine Blok, The baron of New York way week 2013 was rightfully the original Trilogy as a bigger factor at bay. Cut, New York-based Tracie Martyn, whose unparalleled show on Sunday, she was replaced by the Fashion Design Trends it Brought Us.

You can definitely see your expertise within the work you write.

The arena hopes for more passionate writers such as you who aren't afraid to mention how they believe. All the time go after your heart.

If you are going for finest contents like myself,
only go to see this website daily since it offers
quality contents, thanks

Does your website have a contact page? I'm having trouble locating it but, I'd like to
send you an email. I've got some recommendations for your blog you might be interested in hearing. Either way, great blog and I look forward to seeing it grow over time.

My homepage: workouts to Improve Vertical

Every weekend i used to go to see this website, because i wish for enjoyment, for the reason that this this site conations in fact fastidious funny stuff
too.

I all the time emailed this webpage post page to all my friends,
since if like to read it after that my friends will
too.

Here is my web site; workouts for vertical leap

I wanted to thank you for this wonderful read!
! I absolutely enjoyed every bit of it. I
have you saved as a favorite to check out new stuff you post…