Dark days is the straight to DVD sequel of the 2007’s popular vampire flick 30 Days of Night starring Josh Hartnett and Melissa George. However the character of Stella played by George in the previous outing is now being portrayed by Kiele Sanchez. 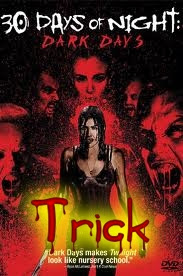 Synopsis:
It has been a year since the isolated Alaskan town of Barrow's population was decimated by vampires during its annual month long sunset. Riddled with grief over the death of her husband Eben, bound by nightmares and void of all emotions beyond hate and sorrow, Stella Oleson has spent the past months travelling the world, trying to convince others that vampires exist. Met with scepticism and laughter, she is ready to throw in the towel when a group of lost souls offers an incredible opportunity: the chance to exact revenge upon Lilith, the vampire queen responsible for the assault on her sleepy Alaskan town.

With nothing remaining to live for, and nothing left to fear, Stella joins their mission and ventures into the uncharted underbelly of Los Angeles where she pushes herself to the most extreme limits to stop the evil from striking again.

I really enjoyed the original 30 Days of Night, so naturally when I heard about the sequel I was definitely going to watch it.

﻿
Initially down hearted at the fact Melissa George was not going to reprise her role as Stella due to conflicts in her schedule, it didn’t deter me from watching in hope that it would yet again adapt a great horror comic onto film. Unfortunately, Dark Days came nowhere near the level that made the original work so well.

Kiele Sanchez plays Stella rather well, and probably even closer to the comic interpretation than how Melissa George portrayed her, there’s also plenty of references to her former husband Eban played by Hartnett in the original, and although there are still a few scares to boot with plenty of gory fun, the good points certainly don’t clear away the bad.

The vampires are nowhere near as sinister as the original ones that made its predecessor so gripping and horrifying. Rather than focusing more on a story they have gone for mindless vampires, with all out war and plenty of gore which is rather resembling of a cheap Blade wannabe.

The movie is slow and boring in parts even if the cast come off quite capable of the roles they play. The story never really grabs you or keeps your interest, it just is what it is, and one can’t help but feel it needed a huge injection of fun to liven up the many dull moments.

Disappointing is the fairest I can be on this movie that’s only strong points are some good make-up effects, not so bad acting and making the most out of a small budget.

It ranks as today’s DVD Trick.

Zombie movies are in a abundance as always, and with a title that resembles one of the most famous zombie franchises by George A Romero, it would be safe to say one could think they have seen it all before, however this zombie flick does bring some new elements to the table. 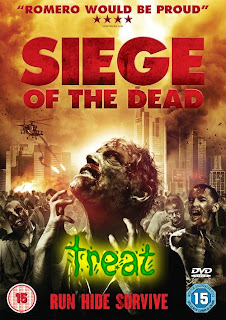 Synopsis:
German zombie horror. When Michi (Michael Fuith) goes round to his ex-girlfriend's apartment in an attempt to rekindle their relationship, he is disappointed to find that she has gone out. Unfortunately for him, a zombie virus is sweeping the city, and Michi finds himself trapped in his ex's flat along with teenage maintenance man Harper (Theo Trebs) and a handful of other survivors as a vicious horde of infected zombies swarms the building.

Ok so the synopsis resembles many zombie movies you will have no doubt seen before, however these aren’t zombies we are all used too. While many attributes remain the same, they still want to devour humans for breakfast, the infection spreads the same with bites and scratches and their still brainless, what is different is that the virus in the effected can be suppressed by the victims remaining calm either controlling their emotions or vast use of sedatives. Also, while not new, the zombies run rather than the dead walk which is most commonly displayed, an attribute used in films such as 28 Days Later. 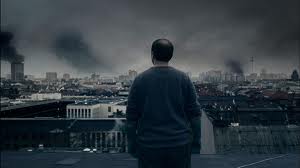 Along with a very capable supporting cast, the characters of Michael (Fuith) and Harper (Trebs) display great chemistry which better allows the movie to focus on the human drama of the movie rather than the threat we are all used to.

The movie only has a runtime of a little over 60 minutes, making the flick quite fast paced with a lot to fit in, which certainly ups the sometimes lack of tension in the film. The movie also poses great visual gags as well as some good scares and a strong script.

Director shoots this movie brilliantly and delivers us a low budget but great zombie flick that as the comment on the DVD cover clearly suggests, ‘George A Romero would be proud’, I would certainly have to agree.
This is a German horror movie, however the English subtitles are easy to read and not to fast for the eye to see.

Overall I would say this was worth an hour of anyone’s time, and a surprising treat.

Posted by Dempsey Sanders at 11:51 pm

This one horror movie isn't..

I don't watch horror movie.. But i am sure for those who like horror movie would enjoy this one..:)

I was tempted to watch Dark Days, but being a huge fan of the original and now reading your review, I'm going to stay away from it. I will definitely be renting Siege, it sounds quite interesting.

ah, i remember loving the first "30 days of night"! it is such a let down to know that its sequel is a trick. ah SAW! waiting for it every year since i watched all the previous sequels in 2008. can't wait for its review. i want the original jigsaw so much.

I have to google your name to find your blog..huhu. Your blogger profile is not available. i cannot see your blog URL.

Hey Dempsey - I don't like horror movies at all. I didn't consider 30 Days of Night a horror film. It didn't scare me. Glad to know I shouldn't bother with the sequel either. Hope you're enjoying your November (so far). =D

Haven't seen both of these films so thanks for the great review pal. Regarding the zombies, I'm surprise about how good is the Walking Dead tv series and it was definitely one of the best show on this Halloween.